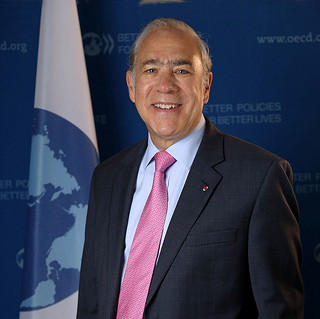 Could the recovery from the worst crisis in half a century finally take hold in 2014? There are several encouraging signs, not least in the US, where growth is expected to accelerate towards 3% in 2014. Activity is also picking up in Europe, Japan and China. Ireland has successfully exited the IMF/EU/ECB-supported programme.

OECD-wide unemployment should edge down slightly this year, though there are still over 13 million more unemployed than in 2008. Trade should receive a boost from the long-awaited deal struck by the World Trade Organization in Bali last December. All this good news will help lift public confidence, which in turn will feed into the global economic recovery.

However, the global outlook remains fragile. While leading indicators are showing signs of improvement in most advanced economies, the outlook for emerging economies is still weak relative to earlier growth projections. The burden of high debt and unemployment will continue to bear down on activity in the OECD area. Fragility in the euro area banking sector and the normalisation of global monetary conditions may also pose risks for the recovery. And investment, which is an important cylinder of the growth engine, has yet to be jump-started in the most mature economies.

In the financial sector, more work is needed to prevent the excessive risk taking and exposure that led to the crisis. Liquidity is abundant as a result of accommodating monetary stances in the world’s largest economies, but credit conditions for small and medium-sized firms remain tight. Efforts to strengthen the financial system worldwide and to sever the links between banking and sovereign debt distress in Europe are most welcome for making sure that improvements in the global financial outlook translate into better prospects for the real economy.

An important, hard-learned lesson from the crisis is the need to ensure that future growth delivers a resilient, inclusive and greener future for all. In 2013 the OECD was again at the heart of multilateral efforts, by supporting the reform agendas of member and partner countries, as well as the G20 and G8 dialogue mechanisms. For example, OECD work to promote international tax transparency through automatic exchange of information as the new single and global standard, and to address tax avoidance by multinationals, based on the G20/OECD Action Plan on Base Erosion and Profit Shifting (BEPS), will help build a fairer and more efficient international tax system.

OECD work has continued to promote inclusive growth, boost skills, and support our members’ efforts to create more and better quality jobs, particularly for the young. The OECD also raised policy awareness about the role that investment in knowledge-based capital (KBC) and trade in value-added (TiVA) should play in growth and development strategies, highlighted the importance of participation in global value chains as a driver of growth, and drew attention to global challenges, such as climate change and the cost of inaction in this area. To regain the trust of citizens in governments and institutions, which was severely dented by the crisis, the OECD has been working to promote competition, stamp out market rigging, promote integrity in public administration and fight corruption. Work on measuring well-being is shedding further light on the legacies of the crisis, while public interest in this path-finding work continues to grow, with over 1 million new online visitors accessing the OECD’s Better Life Index.

All of this progress is but the platform from which we stand to view the challenges ahead. As we begin a new year, we take heart in the inspirational words of the recently departed President Nelson Mandela, whose commitment to peace, co-operation and equality set an example for us all. With foresight about the challenges faced by his country, he eloquently noted that “after climbing a great hill, one only finds that there are many more hills to climb.”

We know from experience that peace and prosperity are hard won, but also easily lost. In 2014 a tentative though firming recovery is on the cards. To nurture and sustain it, we must let co-operation guide our thinking and our actions. Together we must dedicate ourselves to the ongoing task of building a stronger, cleaner and fairer world by adopting “better policies for better lives”.

This editorial by OECD Secretary-General Angel Gurría orginally appeared in the OECD Observer.