March 2016 - Gender equality forms part of research and innovation policy in many countries and organisations. It aims to promote equal participation and opportunities for women and men in research careers, encompassing issues ranging from compulsory education to gender balance in scientific decision-making. Achieving parity in participation in tertiary education is of particular importance, especially in research degrees, as this provides an increasingly important entry mechanism into research careers and senior roles across the science and innovation system. Since 2005, OECD countries have witnessed considerable convergence towards gender parity across most domains. The flow of new doctorates awarded to women has grown at a higher annual rate than for those awarded to men. However, the share of women doctorate holders in the working age population remains below that of men in almost all countries. 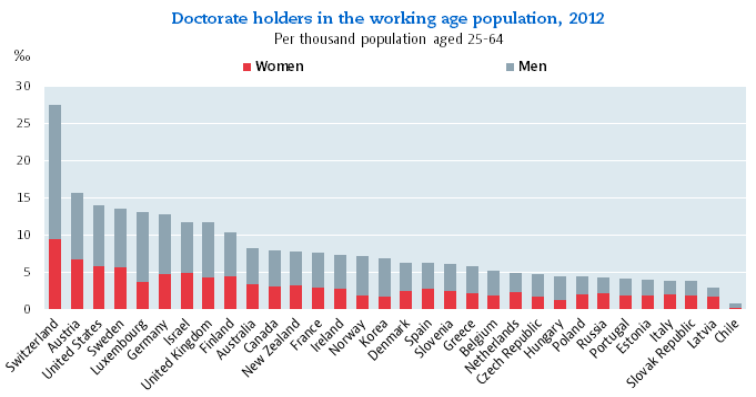 Source: OECD calculations based on OECD data collection on Careers of Doctorate Holders, 2014 and other international sources, June 2015

Furthermore, a new indicator based on an experimental global survey of scientific publication authors, shows considerable differences across countries in the share of women among authors who are designated as corresponding authors, a proxy for leadership in the context of research collaboration. These figures reflect patterns found in OECD statistics on the gender composition of the R&D personnel workforce and doctorate holders, but present a slightly more male centric gender distribution. This may signal additional challenges for women researchers to feature as leading authors. Despite the non-linear nature of many research careers and the time taken for convergence in doctorate graduation numbers to be reflected at more senior levels, the data suggest that gender equality in scientific publishing and team leadership is not occurring as rapidly as in careers. Data from this survey reveal that representation of women is highest in the social sciences, especially in the arts and humanities (slightly above 30% of corresponding authors), and lowest in physics, followed by materials science and chemical engineering at 15% or less. 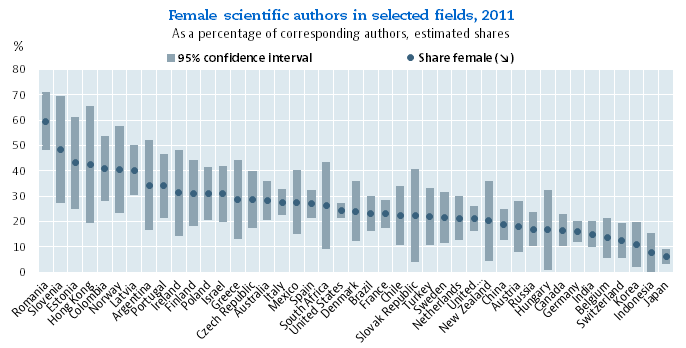 Note: This is an experimental indicator, based on a stratified random sample of scientific authors.
Source: OECD, based on preliminary analysis of the "OECD Pilot Survey of Scientific Authors", July 2015.

How were these estimates derived? Estimates were based on the authors’ self-reported gender in the OECD Pilot Survey of Scientific Authors carried out in January 2015. Samples were drawn from documents published in 2011 and indexed in the Scopus database, focusing on the document’s author designated as “corresponding author”. The fields covered in this survey include Arts and Humanities, Business, Chemical Engineering, Immunology and Microbiology, Materials Science, Neuroscience and Physics and Astronomy. Weighted averages take into account sampling design and non-response patterns by fields, country and journal status. No gender information about the population is available, so this factor does not enter the calculations of sampling weights and non-response analysis. A number of researchers and organisations are exploring how to use information on names to identify the statistically most likely gender with a view to enabling more detailed gender-based analyses.