It’s time to close the gender gap in research

Much progress has been made in the campaign for gender equality, yet women still face significant barriers to advancement in the workplace. This is particularly true for researchers. Results from the latest OECD International Survey of Scientific Authors (ISSA2) show that women are under-represented in research careers, as they are in many other sectors. On average across OECD countries, women comprise only around 40 percent of all researchers – ranging from 23 percent in Luxembourg to 56 percent in Lithuania – and they are considerably less likely to be in leadership positions. Only 30 percent of corresponding authors are women, according to ISSA2, suggesting that female researchers may have less opportunity to both enter and advance in their fields. The magnitude of this gender gap varies significantly across fields of research. There is near-parity in the social sciences and psychology, where 45 percent of corresponding authors are women, while women account for only 15 percent of corresponding authors in physics and astronomy (see Figure 1). 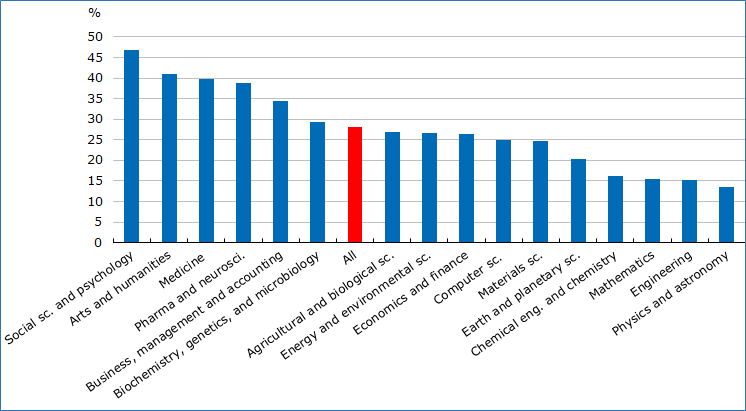 According to the survey, women authors earn on average 5 to 6 percent less than their male counterparts, even after accounting for individual and job-related characteristics. This gap persists even though there is no evidence that women’s research is of lower quality: the work of male authors is not more likely to be cited or be published in prestigious journals than that of female authors. The gender wage gap is particularly wide in engineering and computer sciences (nearly 27 percent), and regarding senior management positions (15 percent).  This suggests that women are at a greater disadvantage in certain fields – typically those associated with more prestige and better pay. Women authors also tend to be less mobile than men are. Around 24 percent of male authors live in a country that is different from where they attained their highest degree, compared to only 18 percent of women. Such lack of mobility may hinder progression for women in their careers.

The gender gap in research is likely to increase as a result of the pandemic. According to a recent OECD flash survey on the impact of the pandemic crisis in research, women are increasingly experiencing a reduction in their time for research and are more concerned than men regarding their job security and career opportunities.

Figure 2: Impact of the COVID-19 crisis on scientific work or careers

Percentage of responses by respondent profile 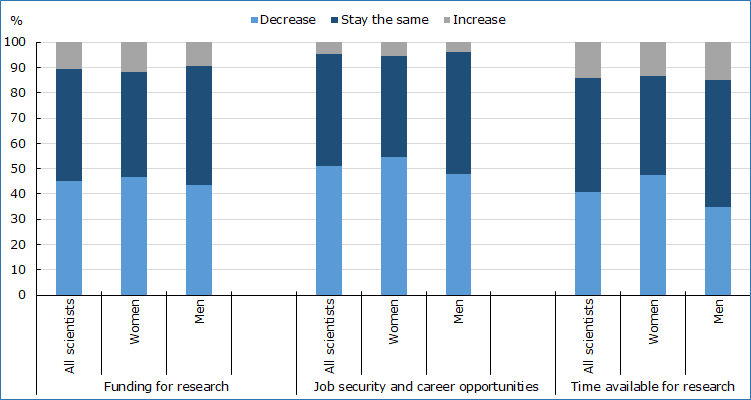 ISSA is a new OECD study that aims to collect evidence on emerging policy issues in the field of science. As a voluntary, online survey of only corresponding authors, its results may not be truly representative of the population of all authors and should be interpreted with caution. Yet the 12 000 responses to ISSA2 gathered globally compare favourably with similar online surveys, and the statistical methods used to correct for potential participation biases provide stable and granular insights that are difficult to glean from official surveys – including findings related to gender differences