Large reductions in cancer mortality rates among men on average across OECD countries since the mid-1990s, but the gender gap remains large

Lung cancer imposes the highest mortality burden, accounting for 26% of all cancer-related deaths among men. For women, lung cancer accounted for 17% of all cancer-related deaths. In many countries, lung cancer mortality rates for men have decreased over past two decades, whereas lung cancer mortality has risen for women in several countries such as France and Spain. These conflicting trends are explained to a large extent by the high number of women who started smoking several decades later than men (in the 1980s and 1990s). Breast cancer is the second most common cause of cancer mortality in women in many OECD countries. While there has been an increase in the incidence of breast cancer over the past decade, mortality has declined in most countries due to earlier diagnosis and better treatment. 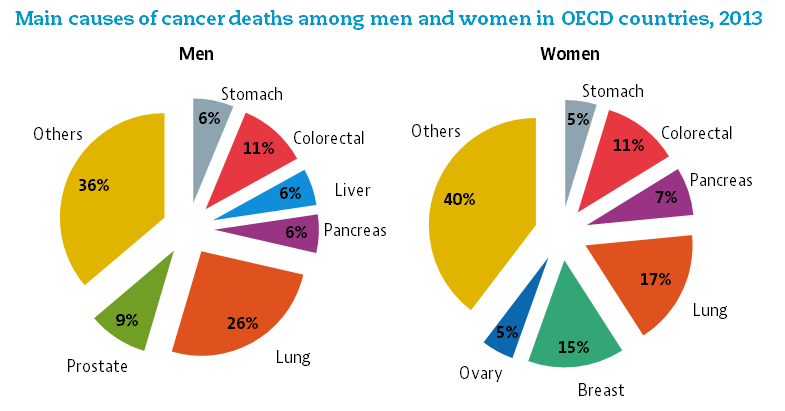 One-third of cancers are preventable. Countries need to invest in prevention programmes, such as support to help people quit smoking and prevent young boys and girls from starting to smoke. Countries must also put systems in place that maximise the chances of cancer being diagnosed early. Systematic screening of at risk populations should be offered where it is proven to reduce mortality and where cost-effectiveness is acceptable. Population-based call/recall systems generally achieve a higher rate of coverage than programmes which rely on opportunistic uptake. Countries can also make additional efforts to increase public awareness about the benefit of regular screening, particularly among disadvantaged populations.