Financing the unfinished business of gender equality beyond 2015

The third Millennium Development Goal (MDG 3) – to promote gender equality and empower women – has been a catalyst in galvanising new resources for gender equality and women’s rights. Bi-lateral donors’ aid in support of gender equality has tripled since the MDGs from USD 8 billion in 2002 to USD 24 billion in 2012. Most of this aid went to education and health. Retaining a strong standalone goal on gender equality in the post‑2015 framework alongside gender‑specific targets and indicators across all goals will be critical for mobilising the investment needed to address the “unfinished business” of the MDGs.

Aid in support of gender equality and women’s empowerment 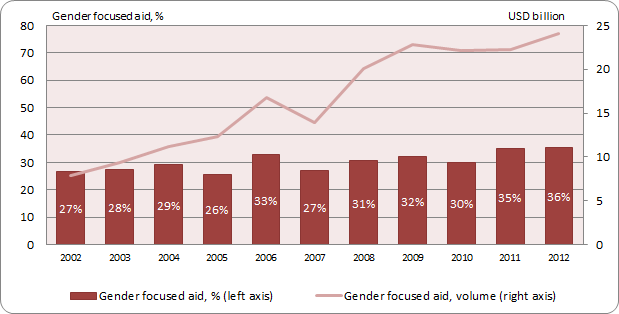 ‌Despite the upward trend in aid to gender equality, significant funding gaps remain in priority areas: women’s economic empowerment, family planning, women, peace and security, and women’s participation and leadership. In the area of women’s economic empowerment, donor investments have remained flat since 2007. Bi-lateral donor funding to family planning has declined as a share of total aid to population policies and programmes – from 71% in 1995 to plateau at around 20% between 2007 and 2011. This is a significant gap given that one in five women has an unmet need for family planning according to data from the Social Institutions and Gender Index (SIGI). Aid to women’s participation and leadership have also remained low – just over USD 1.2 billion on averagefor the years 2002‑12. The post-2015 framework is a crucial opportunity to close these gaps by putting gender equality priorities at the heart of the new global development framework.

Sources: Gender equality and women’s rights in the post-2015 agenda: A foundation for sustainable development; Unfinished business - Women and girls front and centre beyond 2015