07/03/2014 - Greater gender equality in working hours is not just about more women in full-time employment. It is also about more men reducing their long hours in paid work. Although detailed information is available for a limited number of OECD countries, data on the usual hours worked per week illustrate how the prevalence of long and short working hours differs across countries and the sexes.

The forty hour working week is the overriding working hours’ pattern for both men and women in the Czech and Slovak Republics, Poland and Hungary. In Finland, Norway and Sweden collective and/or sectoral agreements often lead to usual weekly working hours of around 37.5 hours per week. Indeed, the long working hours’ culture is not pervasive in Scandinavian countries, which contributes to the general perception in these countries that pursuing both active work- and family lives are compatible aspirations for both fathers and mothers. 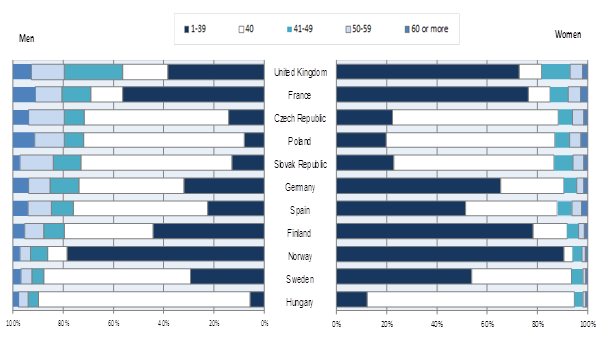 Over the last 50 years, women decreased their hours of unpaid work as they increased the hours of paid work. Men have been doing more housework and child care, but they didn’t take up the slack so gender inequalities in the use of time are still large in all countries. Turkish women spend the most time doing unpaid work, such as housework or shopping, at 377 minutes a day, followed by Mexican women at 373. This compares to their menfolk: Mexican men who spend an average of 113 minutes on unpaid work and Korean men who spend only 45 minutes, the least of all. If we look at the sum of paid and unpaid work, women work more than men (2.6 hours more per week on average across the OECD).

In virtually every country, men are able to fit in valuable extra minutes of leisure each day while women spend more time doing unpaid housework. 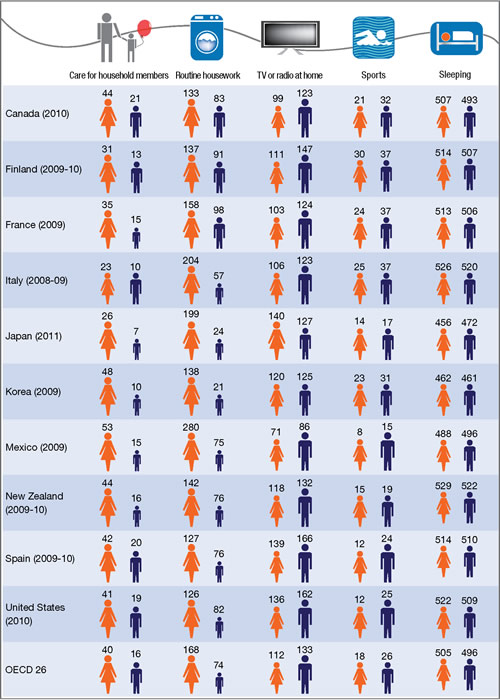 Source: OECD based on data from National Time Use Surveys.