Wide gap in pension benefits between men and women

March 2020 - Data shows that across European OECD countries, pension payments to women aged 65 and over were 25% lower, on average, than for men. Differences are above 40% in Germany, Luxembourg and the Netherlands, while in Denmark, Estonia and the Slovak Republic the pension gap is lower than 10%.

Hence, the gender gap in pensions is substantially higher than the gender pay gap at 13% on average in the OECD countries in 2017. This is because, on top of often having worked in lower paid jobs, older women are more likely to have worked part-time and to have had longer career breaks. Since pension benefits are often earnings-related, these differences in career profiles between men and women can lead to large gender disparities in pension payments. Moreover, having often spent more time caring for children or relatives over their lifetimes, older women may face difficulties in meeting contributory requirements and are therefore more likely to receive only minimum pension payments or old-age safety nets. Older women who do not receive a pension at all are not covered by the gender pension gap indicator in the Figure below.

Pension systems mitigate the transmission of lifetime earnings inequalities into pensions to differing degrees, but the real culprit is the legacy of decades of inequality in careers and earnings (Lis and Bonthuis, 2019). Even if younger women today will earn more of their pension entitlements, achieving gender equality in pensions will remain a challenge because of the persistent earnings gap and the different distribution of care tasks between parents. Pension systems are not meant to address and solve these issues and, hence, a more comprehensive approach encompassing employment, social and family policies is required to tackle the challenges faced by women and working parents. 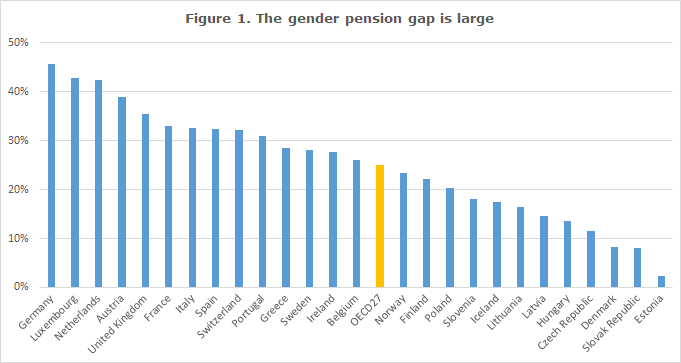