March 2021 - 2020 marked an important milestone with the 20th anniversary of United Nations Security Council Resolution (UNSCR) 1325 on Women, Peace and Security (WPS). Twenty years following adoption of UNSCR 1325, there is important political momentum to assess progress made by the WPS agenda, especially in the context of COVID-19. COVID-19 has exacerbated inequalities worldwide; it has also exacerbated conflict. Such conflict significantly affects women and girls, and contexts that feature larger gender inequalities often feature increased rates of violence towards women and girls. Donor investment in the WPS agenda means investment into women's political empowerment, women's role in the peace process, and addressing gender-based violence, among others.

As a root cause of fragility, tackling gender inequality can not only advance towards specific goals within the Agenda 2030 but can ensure that all aspects of fragility are addressed. In response to the COVID-19 pandemic, DAC members are reprogramming their agendas and trying to find ways to step up their support to developing countries – efforts that may be challenging given the dire economic situation in their own countries. Additionally noting that ODA is the second most important source of external finance after remittances in fragile contexts. While support for gender equality in fragile contexts has increased over the past decade, it is important that progress is not lost in donor responses to COVID-19. ‌ 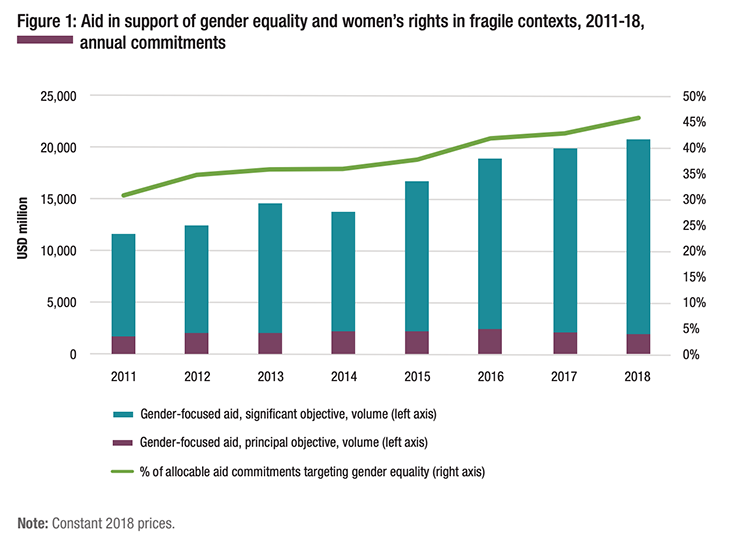 Aid towards gender equality in the productive and economic sectors

Aid in support of gender equality in economic and productive sectors has been increasing over the past ten years and represents 47% of DAC members’ total bilateral aid in these sectors. However, there is not much room for optimism since only 2% of the aid to these sectors target gender equality as a principal objective.

There is potential to do better, especially in light of the ongoing pandemic, which has significantly impacted women’s livelihoods and their engagement as economic actors. Going forward, donors should consider the crucial role of women in crisis response and recovery and make sure that development co-operation programmes and financial stimulus packages fully take into account a gender equality perspective.‌