Cut global poverty in half by 2015 - this is one of the United Nations' Millennium Development Goals. While a few large developing countries have made exceptional progress in reaching this goal, others will fall far short. Why, then, are some countries doing better than others?

To try to answer this question, OECD looked at the experiences of 25 countries that made the fastest progress in reducing poverty from 1980 to 2005. Of these countries, OECD carried out in-depth case study analysis of Ghana, Indonesia and Vietnam, and also analysed the case of Ethiopia.

Was agriculture more important than other sources of income in reducing poverty?
Agriculture dominates non-agricultural activities by its potential to reduce poverty, whether the comparison is within or between countries. More than half of the reduction in poverty achieved in the selected countries during the years under study can be attributed to growth in agricultural incomes.

Remittances account for over a third of the reduction in poverty and are especially important for those in extreme poverty. 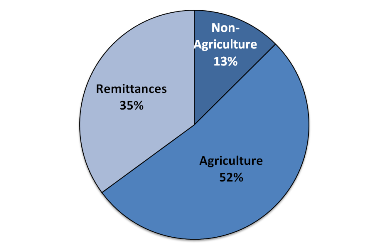 Were the countries making rapid progress in reducing poverty similar in other ways?

Which government policy actions seem to matter most?
Governments of many of the countries studied here significantly reduced disprotection of agriculture that had been caused by over-valued exchange rates and high taxes on agricultural exports. At the same time, rich country trading partners were substantially reducing their own trade-distorting border protection and subsidies to farmers.

This project was financed by a grant from the Government of the Netherlands.