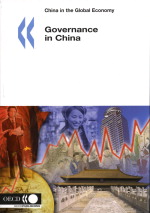 Governance is the next issue to tackle on the development path of the People’s Republic of China. Further adapting institutions and the functioning of the state to an increasingly market-oriented economy is crucial to maintain economic dynamism. Governance reform is also fundamental to address emerging strains related to rising inequalities and environmental deterioration. This report goes beyond the general statement that governance matters. It shows how, in practice, governance impacts on public action by looking at different policy sectors, such as agriculture, higher education, labour market and social protection, foreign investment, environment protection, collection of statistics, protection of intellectual property rights, banking and tax collection. The study also takes stock of the progress made in public management and public finance and explores policy options for the future. Further redefining the role of the state, modernising public management, adjusting the relations between levels of government and consolidating the institutional framework for market forces are four directions in which reform efforts should be pursued.

Governance is recognised as critical to economic development and the achievement of a society’s objectives. OECD member countries target a development path built on three pillars: good governance, economic growth and social cohesion. Good governance is thus seen as a crucial element to address challenges and fault lines facing a nation and to ensure sustainable development. China is now undergoing a crucial transformation in its system of governance, adapting institutions and the functioning of the state to an increasingly market-oriented economy. This transformation is also being spurred by key strains that have emerged related to fiscal and financial imbalances, rising inequalities and environmental deterioration. In 2003, the OECD initiated a project to share with China the expertise of its member countries on governance issues. The China Governance Project was also the opportunity to better understand the challenges faced by China and to organise policy dialogues on these issues. This project was undertaken in the framework of the programme of co-operation between the OECD and China, initiated in 1996. It thus benefited from a relationship of mutual trust established between the OECD Secretariat and Chinese ministries and bodies in many areas.

The Chinese Government has undertaken extensive reforms to its civil service system over the past 10 years. These have encompassed recruitment and selection, training, appraisal, rewards and punishments, compensation, discipline and other areas. This chapter reviews each of these elements. The chapter argues that the capacity of the civil service has improved during the past 10 years. But the capacity improvements may be explained by reasons other than civil service reform, such as by improvements in China’s system of education. The rapid expansion of higher education since 1980 has produced a large population that is eligible for civil service employment.

Chapter 2. The Reform of Public Service Units: Challenges and Perspectives .

China’s large and diverse sector of “public service units” (PSUs – shiye danwei) is a galaxy of public service providers operating alongside core government and separate from other state-owned or state-sponsored organisations such as state-owned enterprises (SOEs), state-owned financial institutions and state-sponsored “social organisations”. Following on from the reform of SOEs and core government, the reform of PSUs represents the third major step of reforms that aim at transforming the organisational structure of the public sector into one that assists the socialist market economy.

Corruption has been openly recognised as an emerging challenge to China’s economic and social reform. In 2002, then President Jiang Zemin defined “anti-corruption mechanisms” as a “major political task for the Party”. Incumbent President Hu Jintao has declared the fight against corruption a priority on the political agenda of his government, as corruption threatens both the economic development and the political and social stability of the People’s Republic of China (PRC). This chapter tracks the development of corruption, analyses the causes for its perceived or real expansion, as well as reforms and policies that the Chinese authorities have adopted in response.

E-government refers to the use of information and communication technologies, and particularly the Internet, as a tool to achieve better government. In China, the state of e-government reflects the transitional nature of contemporary Chinese society toward a “socialist market economy”. The country’s information society is inchoate with persisting digital divides, i.e. diffusion and access to information and communication technologies (ICT) are uneven and although Internet penetration has grown rapidly in wealthy urban areas, it remains fairly low in per capita terms.

Chapter 5. Institutional Arrangements for the Production of Statistics

Chinese statistics have come a long way from a pure reporting system in a centrally planned economy to a system that increasingly relies on surveys and modern statistical techniques to service users, be they government or the public at large. Nonetheless, many challenges remain. In recent years, the quality of Chinese economic statistics, in particular the growth rate of real GDP and other data has been repeatedly questioned by several Chinese and western authors. Questions about data quality inevitably lead to questions about the institutional organisation of China’s statistical authority and the methods of statistical data compilation in China.

Chapter 6. Governance in Taxation in China

With its transition to a market-oriented economy, China has gone through major tax reforms in the last two decades. Significant measures to improve governance in taxation were implemented, including unifying tax laws, equalizing tax burdens, simplifying the tax system, rationalizing the decentralized system and standardizing revenue allocation methods between the central and local governments. However, more needs to be done to improve China’s tax system so that transparency, stability and the rule of law become the guiding principles.

China has undertaken extensive reforms to its budgeting system over the past 10 years. These have encompassed the entire budgeting cycle: formulation, approval, implementation and audit. This chapter reviews each of these elements. China has made crucial progress in this field. The early challenge was fundamentally to create the institutional infrastructure for a modern budget process where none had previously existed. In the planned economy, all resource allocation decisions were made in the plan with the budget serving essentially as a secondary accounting device.

China’s evolution from a centrally planned to a market-based economy has led to major transformations of its public expenditure policies. Significant progress has been made in raising spending on infrastructure to a level more in line with China’s development needs, in improving mechanisms for expenditure budgeting and planning, notably by bringing some extra-budgetary accounts into the main budget. Nevertheless, significant problems remain.

China’s potential benefits from regulatory reform are significant, as is the potential downside if a number of serious regulatory problems are not addressed. This chapter reviews China’s recent efforts to improve regulatory capacities and to build a regulatory environment on the basis of the rule of law.

Enterprise reform in China is facing two main but interwoven challenges: on the one hand, to establish the state as a full or part-owner of enterprises rather than as a manager, and on the other hand, to improve corporate governance in general, and of listed companies in particular.

One of the key institutional outcomes of China’s economic reforms has been to create a new role for employers that is separate from the state and allows enterprises to concentrate on their business. To protect workers, the government has set up public institutions for many social and administrative functions that until recently pertained to work units (danwei) or did not exist. This chapter focuses on three such functions for which the 1994 Labour Law makes the government responsible: employment services, labour inspection and social insurance.

This chapter focuses on two issues, namely: i) the enactment of a general competition law that would provide a coherent basis for combating localism and other “monopolistic” conduct by enterprises and local governments; and ii) the adoption of a “national competition policy” calling upon all parts and levels of government to incorporate competition policy into all aspects of proposed and existing laws and policies that affect market conduct. These two issues were identified in the 2002 OECD study China in the World Economy: The Domestic Policy Challenges and will here be discussed from a governance perspective.

Chapter 13. Governance of Banks in China

The conceptual framework for governance in banking reflects the special role of banks in a market economy. In order for the bank to act as a profit-oriented corporation, it must have genuine owners and the corporate governance regime should enable the owners to hold the management accountable for achieving a competitive return at acceptable risk. At the same time, banks have fiduciary obligations to depositors and also perform many “public good” functions such as acting as repository of savings, supplying currency and allocating resources in the real economy. Therefore, banks operate in a regulated environment.

Today, top leaders in the Chinese Government have become aware of the importance for China to build a sound intellectual property rights (IPR) system. While accession to the WTO has opened new opportunities for the Chinese economy, it has also exposed Chinese firms to greater international competition under the WTO rules, including Trade-Related Aspects of Intellectual Property Rights (TRIPS). This means that the government and Chinese industry need to learn as quickly as possible how to play by the new “rules of the game”. Indeed, Chinese leaders are realising that the protection of intellectual rights is crucial not only as a condition for foreign investment and technology transfer, but also for promoting Chinese innovation, which will determine China’s future competitiveness in the global knowledge economy. China has thus, over the past two decades, quickly developed a set of IPR laws and regulations that are today basically in conformity with international practice and standards. The main challenge for the coming years is to improve upon the governance of the legislative, administrative and enforcement systems in order to make the existing laws more effective in stimulating innovation and protecting IPR.

Chapter 15. The Governance Challenges of Foreign Investment Policy in China

Foreign investment has played a major part in economic development and economic growth in China. When economic reforms commenced in the late 1970s, there was no framework for foreign investment. Thus, existing government structures were adapted and legislation created anew in the form of separate legislative enactments for each form of foreign-invested enterprise (FIE). China has subsequently received large quantities of foreign direct investment (FDI) in the past quarter of a century, rising to nearly USD 55 billion in 2004.

Since reforms began in 1978, China’s agricultural sector has been transformed from a centralized system of commune-based farming into a household-based system. China’s leaders are de-emphasizing formal planning and are increasingly accepting allocation by markets. However, agriculture remains a sensitive area and is subject to intervention. This chapter describes the main institutions dealing with agricultural policies, with some suggestions for next steps in the reform process.

Chapter 17. Environment and Governance in China

China has made remarkable progress in sustaining high economic growth rates, raising incomes and lengthening life expectancy. However, the pattern of economic growth, rapid industrialization and urbanization has not been environmentally sustainable. These processes have generated high pressures on the environment, including surface and ground waters, air in urban areas, land and natural resources. This in turn has adversely affected human health and the productivity of natural resources. If the state of the environment continues to deteriorate, these problems will intensify and the potential for maintaining economic growth may be undermined.

In its quest to become a major player in the global market, China has made impressive strides in many domains, not least in the area of higher education. The Chinese Government recognizes the key role of education in realizing its goals in other domains, and the Ninth Five-Year Plan (1996-2000) and the current Tenth Five-Year Plan (2001-06) have seen enrolment in tertiary institutions more than double from 9.4 million in 2000 to 20 million in 2004. It has also witnessed the rapid rise in the number of non-government (min ban) institutions that compete with the older, better-established state ones.

Readers can access the full version of Governance in China, choosing from the following options: