India’s Development Tug-of-War: Which side will win? 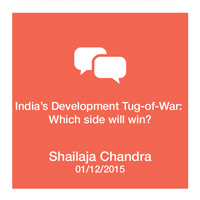 For a chaotic country full of argumentative Indians many of whom are poor and uneducated, India’s continuous economic growth (not prosperity) remains a surprise. But something else is even more striking. The country has the world’s largest youngest population: 27 million babies are added each year. With such youth to bank on, India’s productivity seems to possess the best ingredients for success for decades to come.

But all great stories have another side that also must be told. Most births in India take place in some of the country’s poorest states where high fertility, low age of marriage, and a disproportionately large number of mother’s and children’s deaths present an ever-distressing picture. A group of five states have had the dubious distinction of accounting for around 45% of the country’s population, suffering and stymied from poor investments in health and education. No wonder these states were officially referred to as the BIMARU states, an acronym for their names of Bihar, Madhya Pradesh, Rajasthan, Odisha and Uttar Pradesh, which denotes much more since the word bimaru in Hindi means sickly.

For decades, these states have defied conventional experience about the process of development and held back the achievements of the rest of the country. The differences are stark: some other states in India reached replacement level of fertility as early as 1989 and 1992. Bihar, Madhya Pradesh, Rajasthan, Odisha and Uttar Pradesh, however, may need another five years to get there. The infant and maternal mortality in the progressive states is lower by half, and in some cases even 70% less, than in these laggard states.

Some 15 years ago, the Indian government decided to pay focused attention to these states, particularly in the highly neglected area of reproductive health. Around the same time, the five states were reorganised and became eight in number with the hope that being smaller would help them respond better to the process of development. They were rechristened the Empowered Action Group (EAG), and the pejorative title BIMARU was wiped out of the official vocabulary.  In 2005, the National Rural Health Mission, India’s largest-ever health programme, started pumping resources into these “high-focus states.”  Strategies included revamping rural health infrastructure, promoting health centre-based deliveries, facilitating access to emergency obstetric care, and assigning a trained health activist to make family-level contact, undertake pregnancy tracking and provide access to contraceptives.

Many hoped that with such a high dose of attention, the EAG would eventually catch up. Most, however, did not share this optimism, and not without reason. Even today, strong patriarchal attitudes continue to discriminate against women. Girls are denied access to schooling once they reach puberty. They are married off well before the legal age of 18 and subjected to a host of discriminatory barriers. The political leadership in most of these states has seldom accorded high priority to health or education; many have invested in perpetrating caste-based divisions in society. This backdrop naturally fails to inspire change.

Yet the good news is that by focusing attention on these laggard states and monitoring health indicators annually, a decline in fertility has begun and it is faster than anywhere else in the country. The increase in institutional deliveries has been impressive, and family health surveys and other research show that an increase in the age of marriage and greater use of contraception have contributed to lowering fertility. After decades of stagnation, the population growth rate in these states has registered a significant fall for the first time, dropping from 25% to 20.9%. From the point of view of women, the opportunity to have hospital-based deliveries stands out, complemented by such popular incentives as transportation to a health facility, compensation for leaving home, supplementary nutrition and contraception advice.

While these are positive trends, the push has to continue. These states will contribute 50% of India’s population within the next five years, equalling if not exceeding the combined population of the rest of India. The prospect of half of India holding back the other half is a dismal one. Only if the special efforts mounted receive commensurate political support that simultaneously encourage girls’ education and skill learning, later marriages and spacing between children will the laggard 50% eventually catch up. Happily, the process has begun.

India has been a member of the OECD Development Centre since 2001.