Accueil de l'OCDE Centre de développementBringing the Blue Skies Back to Beijing: How the Private Sector Can Green Growth in China

Bringing the Blue Skies Back to Beijing: How the Private Sector Can Green Growth in China 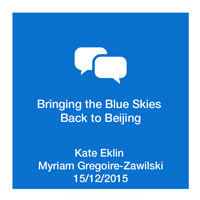 Last week, officials in Beijing declared an air pollution “red alert” for the first time since the monitoring system was implemented in 2013.[1] Pollution levels put life in the city on hold: factories shuttered, schools closed, traffic was restricted, fireworks were banned.

Between this latest “airpoclypse” and the just-concluded COP 21, everyone is talking about China and its part in the climate agenda. Why? China is the largest greenhouse gas emitter. While China is certainly part of the climate change problem, it is a big part of the solution. Indeed, China is also the world’s largest investor in renewable energy. And public and private investment will be critical for China to transition to a greener and cleaner economy.

The recent economic trend in China poses an opportunity. Growth is expected to slow below 7% because economic actors are adapting to what has come to be called the “new normal.” This adjustment process is a chance to move away from the growth-above-all-else model to a green economy.

China is taking action now in that direction. Ahead of COP 21, China made ambitious pledges to reduce carbon emissions per unit of GDP by 60-65% from the 2005 levels by 2030.[2]  During COP 21, China announced it will cut annual coal consumption by 100 million tonnes and reduce power sector emissions of major pollutants by 60% by 2020.[3]

Yet, the Chinese government recognises that it cannot transition to a low-carbon economy alone. Recent figures from the People´s Bank of China and the United Nations Environment Programme calculate that USD 320 billion in green investment is needed annually over the next five years to achieve 2020 environmental targets. The Chinese government, however, can only supply 10-15% of this capital; the remaining investment will need to come from the private sector.[4]

Despite the economic slowdown, private companies expressed optimism about green business prospects at a recent Emerging Market’s Network (EMnet) meeting in Beijing, hosted by the OECD’s Development Centre. The 6-7% growth rate for the Chinese is still significant and generates important opportunities for private investment in renewable energy and green technology.

Indeed, investment in renewable energy is growing rapidly and ambitious emissions reduction goals should further propel China’s growth. In 2013, investment in new renewable energy production surpassed coal for the first time,[5] and China accounted for 72%, 40% and 33% of the world´s new hydro, wind and solar power respectively.[6] What will be critical for both domestic and international renewable energy companies will be to have predictable policies to guide their investment, together with stable renewable energy tariffs.

And the universe of investment opportunities is significant. Air, water and land pollution, for example, is creating opportunities for green technologies to improve resource efficiency and reduce emissions. Urbanisation is increasing vehicle emissions, but also creating markets for green development. Air treatment, in particular, is expected to create trillions in investment opportunities. The market for electric vehicles is also growing rapidly, and China is now the biggest producer and consumer of electric vehicles.[7]

In industrial technologies, the government is stepping up investment. However, private sector participation in research and development (R&D) remains relatively low. While improved intellectual property rights protection has generated private R&D in the renewable energy sector, foreign firms continue to stress the importance of improving legal protections to spur additional innovation across the green technology spectrum.[8]

The right enabling conditions will allow the private sector to seize opportunities in green investment. This, in turn, will expedite China’s transition to a low-carbon economy and generate major economic and human health benefits for Chinese society. The OECD estimated that the health impacts of outdoor pollution cost China USD 1.4 trillion in 2010.[9] Large particulate matter contributes to 350 000 premature deaths a year.[10] Clean investment can reduce such economic costs and save lives. By working together, public and private investment can transition China to a greener economy.