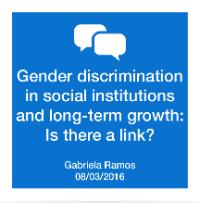 By Gabriela Ramos, Special Counsellor to the OECD Secretary-General, OECD Chief of Staff and Sherpa to the G20

Women’s economic empowerment remains a critical challenge around the globe. Only half of working-age women are in the labour force, earning on average 24% less than men and are less likely to receive a pension (UN Women, 2015). Women are also disproportionately concentrated in informal and precarious employment, and they spend nearly two and a half more times than men in unpaid care and domestic work (OECD 2014). In schools, girls are less likely to choose STEM (science, technology, engineering, mathematics) careers, choosing other options that are less promising.

What explains such persistent gender inequality in outcomes? Many policy settings and regulatory frameworks drive these results. Underlying all of them are discriminatory social institutions that reproduce gender stereotypes and mind-sets that go against women. Research using the OECD Development Centre’s Social Institutions and Gender Index (SIGI) documents how discrimination in laws, attitudes and practices translates into gender gaps in outcomes related to education, employment and empowerment. Early marriage and pregnancy, for example, cut short girls’ education at the secondary level. In Uganda, pregnancy or marriage is cited as the main reason for dropping out of school by up to 21% of girls in some regions (OECD, 2015).

The political will to close the gender gap is expanding rapidly, however. Gender equality is becoming central in global and national policy making. World leaders are committed to reaching the ambitious target of gender equality by 2030 with the adoption of Sustainable Development Goal 5. In 2014 in Brisbane, Australia, G20 leaders committed to reducing the gender gap in labour force participation by 25% by 2025. The OECD was proud to contribute to this outcome with its analysis and work.

Gender equality is also gaining ground as “smart economics” – a way to boost economic growth through increased human capital, labour force participation and enhanced productivity. Women are now more educated and are reaching higher levels of school attainment than ever; yet this has not translated into labour market gains. Removing the barriers to their inclusion in the labour market has had positive effects for increasing the growth potential of countries. Indeed, just fulfilling the G20’s gender target could bring 100 million women to the labour markets of those countries. We already know from empirical studies that gender inequality in outcomes is bad for growth, especially when it comes to gender disparities in education and labour. New evidence indicates that gender-based discrimination in social institutions also impedes economic growth beyond those outcomes, according to a recent analysis by the OECD Development Centre.

The analysis shows a strong negative relationship between gender discrimination in social institutions and income per capita. This negative influence is found to be stronger for low-income countries and seems to affect the level of income by lowering the level of human capital, labour force participation among women and total factor productivity. What this means is that gender equality is a key economic issue in its own right, rather than a “soft” development topic that can be marginalised or ignored in national growth strategies.

These findings add to existing research to better use the measure of gender-based discrimination in social institutions and analyse inclusive growth in countries at different stages of development. Strong evidence like this makes the case for including policies and programmes in national growth strategies that directly target discriminatory social institutions, while helping countries identify ways to make gender equality a reality. Reducing gender discrimination is good economics and good policy. It is a key objective of the OECD and its Development Centre as we support countries achieve more inclusive and sustainable development.