04/09/2014 - Iceland has one of the world’s most pristine natural environments and its glaciers, volcanoes and hot underground springs bring major economic benefits via renewable energy and tourism. Continued growth in power generation for aluminium smelting and in tourist numbers must be managed carefully to preserve these natural assets, an OECD report says.

The OECD’s third Environmental Performance Review of Iceland notes that the country’s electricity output has more than doubled since 2000 to nearly five times the amount needed by the population of 320,000, mainly to fuel three foreign-owned aluminium smelters. The number of tourists drawn by Iceland’s rugged landscapes has also more than doubled in the same period to around 700,000 visitors a year. Both trends put pressure on the environment.

“The combination of renewable energy and spectacular natural tourist attractions create opportunities for Iceland to play a pioneering role in the world’s transition to green growth,” said OECD Environment Director Simon Upton, presenting the report in Reykjavik. “Yet these assets must be well-managed and the conflicts fully addressed between these competing uses of land.” 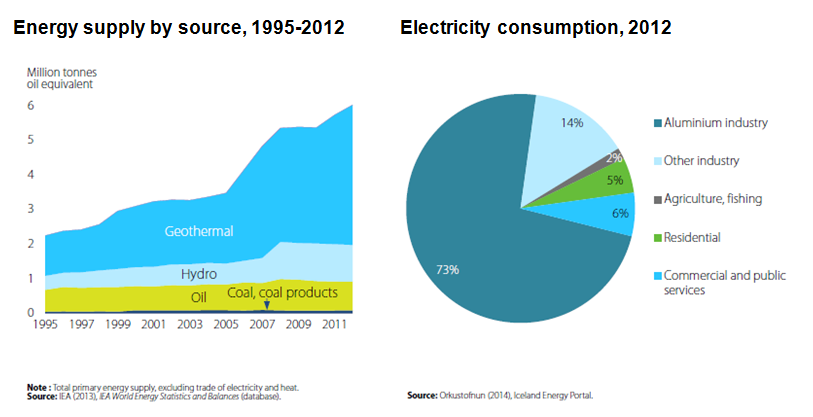 Renewable energy sources account for 85% of Iceland’s total energy supply, far more than in any other OECD country, and covering all of the country’s electricity needs and 95% of its heat. Any imported fossil fuels are used primarily in transport and fishing.

While hydro and geothermal power plants emit virtually no greenhouse gases, they can put pressure on local environments and they generate wastewater and pollutants that are detrimental to biodiversity and health. The financial return on existing contracts to supply smelters with low-cost power may not be sufficient to cover the related environmental costs.

Tourism contributes around 6% of Iceland’s GDP, yet the arrival of growing numbers of tourists during the short summer season is putting a strain on fragile ecosystems and on infrastructure such as wastewater treatment designed for a small population. There is a need to provide access paths and other facilities at tourist sites in a way that ensures environmental protection. In some cases this is affected by a shortfall in financing.

Iceland has taken an important step towards addressing the trade-offs between power production, tourism and nature conservation in adopting a Master Plan for Hydro and Geothermal Energy Resources. This provides a clear guide on where energy resources can and cannot be developed.

The OECD Review recommends reinforcing the scientific and economic analysis in the next phase of the Master Plan and reassessing the prices Iceland sells electricity for to factor in the costs of caring for the environment. It suggests developing a sustainable tourism action plan and mechanisms to ensure that tourists contribute to financing nature preservation.

You can read the full report and a highlights document summarising the main points is available. For further information or to speak to the authors, journalists should contact Catherine Bremer (+33 1 45 24 97 00) in the OECD’s Media Division.