01/03/2018 - Lithuania’s economy has recovered strongly from the global financial crisis, with GDP, wages and employment levels back up to their pre-crisis levels. The country should now focus on tackling the demographic challenge of a fast-declining population and making the job market more inclusive, according to a new OECD report.

OECD Review of Labour Market and Social Policies: Lithuania says that the population has been declining by more than 1% annually since the early 2000s, as people leave to seek better-paid quality jobs abroad. The working-age population is forecast to decline by about 9% between 2015 and 2020, and by a further 20% in the 2020s. The old-age dependency ratio is thus expected to increase from 28 old-age people for every hundred working-age residents in 2015 to 46 in 2030, a sharper increase than in most OECD countries. 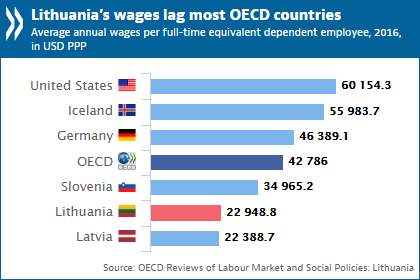 Wage gaps with other European countries are closing too slowly to suggest that emigration will decline soon, according to the report. Income inequality is also very high and the poorest households have seen little improvement in their living standards over the last years.

“To better share the fruits of economic growth, labour market inequalities and large regional disparities in employment and educational outcomes must be addressed,” said Stefano Scarpetta, OECD Director for Employment, Labour and Social Affairs, launching the report in Vilnius with Linas Kukuraitis, Lithuania’s Minister for Social Security and Labour. “Moreover, efforts should be made to enhance job quality, given the still widespread informal employment and low wages. The share of informal workers not covered by social security or labour laws is higher than in any other EU country except Latvia.”

“Becoming a member of the Organisation for Economic Co-operation and Development is one of the most important strategic goals of Lithuania,” said Linas Kukuraitis, Lithuania’s Minister for Social Security and Labour. “We are glad that part of the OECD‘s recommendations for Lithuania are already being implemented. For example, the reform of Lithuanian Labour Exchange, increasing the adequacy of cash social assistance by increasing the amount of state supported income and introducing the amount of minimum consumption needs calculation methodology.”

More needs to be done to attract emigrants to come back. Return rates are less than 40% for the migrants who left in 2010, and later emigrants are less likely to return. Among those who do return, more than two-thirds do not work, making them more likely to leave again. The Global Lithuania programme, designed to ensure the continued involvement of the diaspora in the life of the state, is currently underfunded and needs to be better resourced, especially to support returning workers. More efforts should also be made to promote job opportunities to Lithuanians unsatisfied with their jobs abroad.

The OECD also recommends that Lithuania: