The global economic recovery remains fragile and unemployment is likely to stay high until the end of 2011.

How high is unemployment?

In total, about 47 million people are officially unemployed in OECD countries, making for an unemployment rate of 8.6% as of May 2010. That’s up from 5.8% in 2007, which means there are now about 17 million more people out of work than before the crisis.

However, the official figures don’t tell the full story: Taking into account people who have given up looking for work or are working part-time but want to work full-time, the actual number of unemployed and under-employed in OECD countries could be about 80 million. 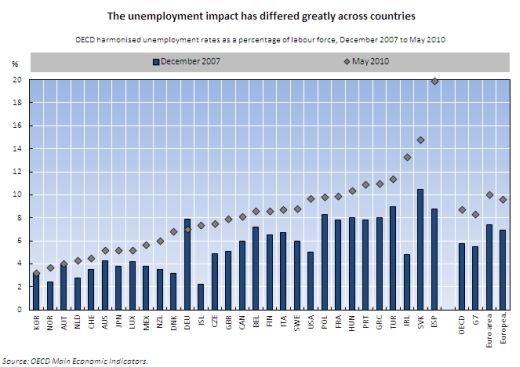 The latest data suggest unemployment in OECD countries may have peaked in April 2010. However, even with somewhat stronger job creation through 2011, joblessness is likely to remain above 8% in 2011. Despite improvements in labour market policies to help jobseekers get back to work, there’s a danger that some of the recent rise in unemployment will linger.

What have governments done so far?

Employers in a number of OECD countries made extensive use of hours reductions (“work sharing”) as an alternative to layoffs. As a result, even though GDP fell back in both Japan and Germany, for example, unemployment increased little.

When it comes to improving the job prospects of the unemployed, much of the focus has been on expanding the capacity of public employment services, job-search assistance and training programmes. Around half of OECD countries have moved to increase the incomes of workers who have lost their jobs by expanding unemployment benefits or extending coverage to those previously excluded. A number of countries have also provided new or expanded support through social assistance, training allowances, housing support or health insurance.

A number of countries have stepped up resources for training existing workers or apprentices to improve their labour market prospects or provide income support for low income earners through the tax system.

What issues will governments need to tackle in the months ahead?

As the recovery strengthens, it will be vital to create the right incentives for firms to hire more workers. This could involve temporary hiring subsidies and improving the employability of jobseekers, through, for example, training. But it could also mean finding a better balance between temporary and permanent contracts. In many countries, employers find it hard to remove workers on permanent contracts, and so instead favour temporary hires. As a result, temporary jobs often become traps – especially for young workers – rather than serving as stepping stones to permanent jobs.

However removing some of the job protection of permanent staffers would imply that, over time, they would face increased labour mobility with the prospect of reduced earnings, both while searching for a new job and even after finding one. To protect workers’ interests, employment protection would need to be rebalanced as part of a comprehensive package: This would mean providing workers with adequate unemployment benefits – so long as they were genuinely searching for work – as well as training and job-search assistance.

Governments will also need to increasingly target jobs policies on the most disadvantaged groups, and those with few or no skills, who are at greatest risk of losing contact with the labour market.

Contact for questions on impact of crisis on employment