Learning in the womb: Hearing, touching and smelling

It has often been asserted that human foetuses are exposed to environmental stimuli that have a lasting effect. The effects thereof are often negative: medication, viral infections or a malnourished mother might have a harmful effect on the foetus. But environmental stimuli might also have positive influences, as anecdotes tell. For example, during her pregnancy, King Heinrich IV of Germany’s mother had a musician come every morning to play in close proximity to her. At that time, people believed that the foetus could hear the music and that music would have an influence on the person’s later character by preventing him or her from becoming bad humoured. According to historians, this worked for Heinrich IV: he was good humoured all his life.

Some mothers say that they listened to Mozart or Beethoven during their pregnancies in order to give their child a good start in this world. But what should one think of these stories? Does an unborn child store environmental stimuli? In other words, do humans learn while they are still in the womb? Lately the anecdotal stories on these issues have been supplemented with scientific data. It has, for example, been scientifically proven that a foetus starts to hear sounds in the 20th week of pregnancy and is able to react to sounds by the 28th week at the latest. In addition, habituation studies have found that the foetus is not only able to hear tones, but can also memorise them [1,2].

Let’s consider the learning that takes place in order to develop a sense of touch. It has been known for a long time that the somatosensory cortex – the part of the brain where the sense of touch is represented – is plastic, i.e. is able to learn. Because of this, parts of the somatosensory cortex are subject to experiential changes [5]. The sensory regions are sometimes represented as a human figure or separate body parts superimposed over pictures of the surface of the brain, showing which sensory regions link to which parts of the body and referred to as the homunculus. But why is the homunculus so strangely shaped? Why, for example, is the representation of the face next to the representation of the hand, or the representation of the genitals next to the representation of the feet? As an answer to this question, the neuropsychologist Martha Farah generated a hypothesis based on the computational mechanisms of cortical maps. Cortical maps depend on the input that they get, i.e. similar inputs are shown in close proximity to one another on the map, while different inputs, in contrast, are shown as being further away from one another. The foetus is “folded” in a certain way in the womb, so that hands are close to the face and the feet are close to the genitals. Therefore, touch perceptions (e.g. through pressure on the mother’s belly) are, temporarily, spatially similar for the hands and face or for the feet and genitalia respectively, and consequently the cortical map is laid out like a homunculus. Once the map has been formed in utero, it is quite stable in its rough structure. Thus, the foetal position and its resulting touch perceptions could explain why the cortical somatosensory representations are distributed in the manner known for the last 60 years.

Next we will consider the sense of smell. Animal experiments in rats, rabbits and sheep have shown that the introduction of odorants into the amnion, either by direct infusion or maternal ingestion, elicits different infantile responses to the same odorant compared to other odorants. In this way it has been proven that the mammalian foetus already processes chemosensory information, which obviously results in the learning of olfactory cues.

Schaal et al. [4] wanted to know whether similar prenatal processes might operate in the formation of the first selective responses to odours in human infants. In order to test this, they recruited 24 pregnant women from , a region whose local cuisine makes extensive use of anise. Thanks to behavioural observations, it has been known since the 1930s that anise is readily perceived by newborns. The pregnant women were asked about their habitual consumption of anise-flavoured food or drinks and thereby separated into a group of 12 anise-consuming (AC) and 12 non-anise-consuming (nAC) mothers. In the last two gestational weeks (i.e. 15 days before the expected term), women of the anise-consuming group were offered anise-flavoured sweets, cookies and syrup. They could eat as much of these as they wanted, but without any additional change to their regular eating habits. During this time, the women were asked to fill out a detailed record of their daily eating habits and the kind and amount of the consumed anise-flavoured foodstuffs. By decoding these records and using the quantitative information provided by the fabricants on the flavour content of the different foodstuffs, the researchers could precisely evaluate the amount of anise flavour consumed by each mother. Due to the fact that most women delivered before the expected term of gestation, the women of the anise-consuming group consumed anise flavour on an average of 5.6 ± 3.5 days preceding delivery. Postnatally, the women did not ingest any anise-flavoured food. In the control group, no anise was consumed before and after birth.

The newborns were tested within the first eight hours after birth (before they had had any ingestive experience) and on day 4 (about 3.5 hours after they had last been fed). Cotton swabs were impregnated with anise flavour diluted in paraffin oil, or with only the solvent, paraffin oil, and held under the infants’ noses for 10 seconds each in a systematically balanced order. The babies’ behavioural reactions were videotaped. During the second test (on day 4), a two-choice paradigm was carried out, i.e. both stimuli were presented at the same time and the researchers examined the different reactions to the two stimuli.

The video tapes were analysed by an independent researcher according to three variables (a) negative facial reactions (brow lowering, nose wrinkling, upper lip raising, lip corner depressing, etc.), (b) ‘mouthing’ (sucking, licking, munching, chewing) and (c) head turning. In this way the 10 seconds of stimulus presentation and the 10 seconds that followed were analysed (Fig.1).

On the day of birth, a significant effect could be observed in all three variables: the babies who had already smelled anise in the womb showed more positive reactions in mouthing (Fig. 2b) and more negative reactions towards the control stimulus (Fig. 2a). As regards head turning, babies in the control group showed no difference in their reaction to the anise and the control stimuli, while babies of the anise-consuming group turned their head significantly more often towards the anise stimulus (Fig. 2c). Taken together, these results show that infants born to anise-consuming mothers evinced a stable preference for the anise odour, whereas those born to non anise-consuming mothers displayed aversion or neutral responses.

On day 4, the differences in the response were only significant with regards to head turning. Interestingly, the correlation between head turning on the first day and on the fourth day was 0.59. Thus the authors of this study concluded a stable influence of motivation (aversive vs. hedonic) in new-borns considering chemical stimuli in relation to their intra-uterine exposition. 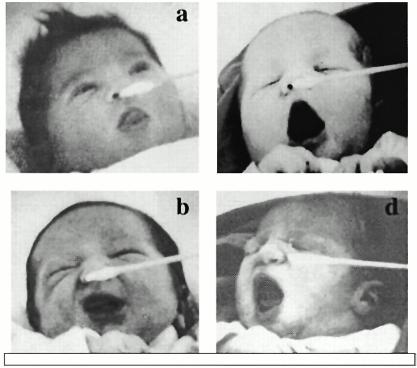 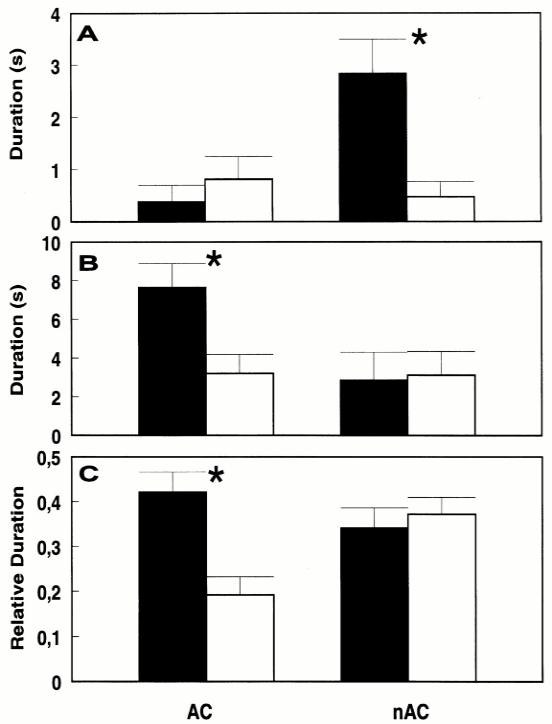