Further structural reforms in Latin America would make an important contribution to medium-term economic prospects and strengthen the social progress achieved during the past decade. Broad-based reforms should focus on four priorities: increasing productivity, reducing inequality, strengthening institutions and improving sustainability. Continued commitment to such policy priorities would not only contribute to further economic growth, but would also bolster resilience in the face of shocks and reduce the risks of sharp slowdowns that may result from extraordinary developments in the global economy.

Latin American will benefit from a world economy that is starting to move at a faster pace
After two years of slowing down, economic growth in Latin America as a whole is expected to accelerate in the course of 2015 and gain further speed in 2016. This pick-up in activity will be driven by stronger external demand as global growth is projected to strengthen in the course of 2015 and 2016. The recovery in advanced economies will be driven by improvements in consumer and investor confidence, as well as by supportive monetary conditions, a slower pace of fiscal consolidation, and lower energy prices. These developments have different implications across Latin American economies, but with a positive effect overall.

Growth is set to gradually recover

The strengthening of the US economy is expected to increase demand for goods from most countries in Latin America, with a stronger impact on major trading partners, notably Mexico and Costa Rica. In the United States, growth will recover thanks to supportive monetary conditions, less fiscal consolidation, lower energy prices and an increase in household wealth. Similarly, the recovery of growth in Europe and Japan will be supported by lower oil prices, currency depreciation and monetary policy stimulus, and will likely increase the demand of industrial goods from Latin American countries. In China, growth is projected to moderate as the economy transitions from being led by investment to consumption of services, and imports are thus expected to weaken.

The implications of the sharp fall in oil prices will differ from country to country, but the overall effect will be positive in Latin America. Lower prices will have an adverse effect on the trade and fiscal balances of countries with high oil exports, such as Colombia and Mexico. However, it will benefit the rest of the countries in the region by boosting real incomes of households, reducing the need for energy subsidies, and improving external balances.

The expected tightening of monetary policy in the United States, where the Federal Reserve is assumed to raise interest rates before end-2015, has contributed to higher financial volatility in Latin America. Stock-market prices have weakened and capital flow reversal has led to exchange-rate depreciation in some countries, with more serious implications where unhedged foreign-exchange exposure was the largest. In particular, currency depreciations have increased the cost of servicing sovereign debt denominated in foreign currencies. In addition, spreads on Latin American sovereign debt has increased faster than in other emerging economies despite still low debt-to-GDP ratios. 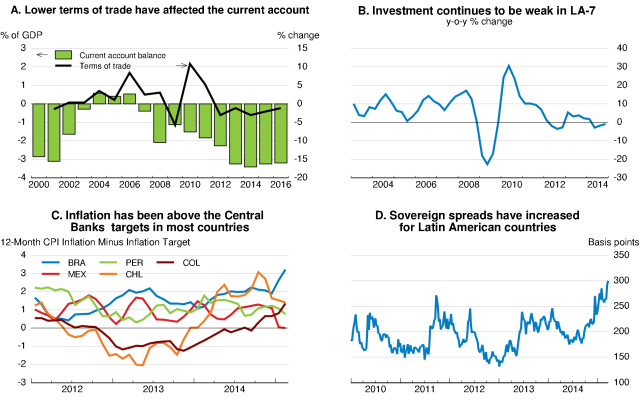