17/03/2017 - Governments must deploy policy packages that take advantage of the synergies between labour, product and financial market reforms to escape the low-growth trap and ensure that benefits are broadly shared by the vast majority of citizens, according to the OECD’s annual Going for Growth report. 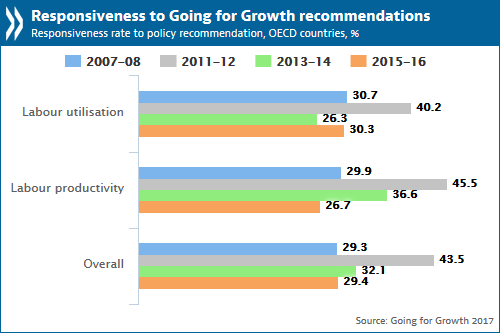 Going for Growth 2017 offers a comprehensive assessment of policy reforms that can be packaged together to boost long-term growth, improve competitiveness and productivity, create jobs and ensure a more inclusive economy.

This year’s edition of Going for Growth reveals an uptick in policy-maker attention to reforms to lift employment, particularly measures aimed at helping women, young people and low-skilled workers enter and thrive in the labour market, and these have delivered results.  However, a worrisome slowdown in reforms that influence labour productivity - such as those in education and innovation policy- is of particular concern in light of the persistent and widespread decline in productivity growth, which is the key to boost wages and living standards.

“Reversing the prolonged period of stagnating living standards that is affecting a large share of people worldwide will require coherent structural reform strategies and the political will to deploy them,” OECD Secretary-General Angel Gurría said. “The vast array of growth and inclusiveness challenges facing advanced and emerging economies call out for a quicker pace and more comprehensive set of reforms.   While efforts to promote employment and bring down inequalities are beginning to pay off, governments cannot afford to let up.” (Read full speech)

Going for Growth 2017 suggests governments should concentrate reform efforts around packages of policy measures designed to simultaneously target economic and social objectives. The framework for selecting policy priorities laid out in this year’s report considers for the first time inclusiveness as a prime objective, alongside productivity and employment, which are the principal drivers of average income growth.

“Governments in most countries need reforms to escape the low-growth trap and prepare for coming technological changes, but they must pay better attention to addressing the concerns of those who bear the costs of the reform agenda,” Mr Gurría said. “Putting inclusiveness at the heart of the policy equation is the only appropriate response to the growing political headwinds that have slowed reform.”

Presenting Going for Growth with German Finance Minister Wolfgang Schäuble ahead of the G20 Meeting of Finance Ministers and Central Bank Governors taking place in Baden Baden, Mr Gurría said that implementing the report’s reform recommendations would help to achieve the G-20 objectives for stronger and more inclusive growth.

The Going for Growth analysis forms the basis of the OECD’s wider contribution to the G20 Framework for Strong, Sustainable and Balanced Growth. The OECD works with G20 countries to quantify their efforts to boost GDP and to achieve national growth strategy objectives.

The recipe for reform varies by country, but the ingredients include measures to promote business dynamism and the diffusion of innovation, to help workers to cope with the rapid turnover of firms and jobs, and to better prepare youth for the labour market of the future. These will require  improving outcomes and equity in basic education and adult training programmes, exposing businesses to stronger product market competition, including through greater openness to cross-border trade and investment, and beefing-up job search assistance and other active labour market policies to facilitate the return to work in quality jobs of laid-off workers.

Going for Growth 2017 notes that the pace of reforms continues to vary across both countries and policy areas. It points out that governments have tended to concentrate reform efforts in specific policy areas, running the risk of missing potential gains from policy synergies and reform complementarities. Improved packaging of reforms would make them easier to implement, maximise the impact on growth and job creation and help reduce income inequality.

Among the highlights in this year’s report:

Further information on Going for Growth 2017 is available at: http://www.oecd.org/economy/goingforgrowth.htm. Detailed country notes are available on OECD and G20 countries.

An embeddable data visualisation for this publication is available at: www.compareyourcountry.org/going-for-growth

Please use the ‘</>’ button to customize this tool for your country  and to generate the embed code for your website.