29/07/2022 - Climate finance provided and mobilised by developed countries for climate action in developing countries reached USD 83.3 billion in 2020, according to new OECD analysis.

Aggregate Trends of Climate Finance Provided and Mobilised by Developed Countries in 2013-2020 is the OECD’s fifth annual assessment of progress towards the UNFCCC goal.

This year’s Aggregate Trends of Climate Finance Report is being released earlier than in previous years in order to contribute to the UNFCCC Standing Committee on Finance Report, being prepared for COP27, on progress towards achieving the goal.

“We know that more needs to be done. Climate finance grew between 2019 and 2020, but as we had expected, remained short of the increase needed to reach the USD 100 billion goal by 2020,” OECD Secretary-General Mathias Cormann said.

“While countries continue to grapple with the economic and social implications of the COVID-19 pandemic and Russia’s war of aggression against Ukraine, we are seeing climate change causing widespread adverse impacts and related losses and damages to nature and people.”

“Developed countries need to continue to ramp up their efforts in line with their stated commitments in the lead-up to COP26, which would mean the USD 100 billion goal would be reached from next year. This is critical to building trust as we continue to deepen our multilateral response to climate change.” 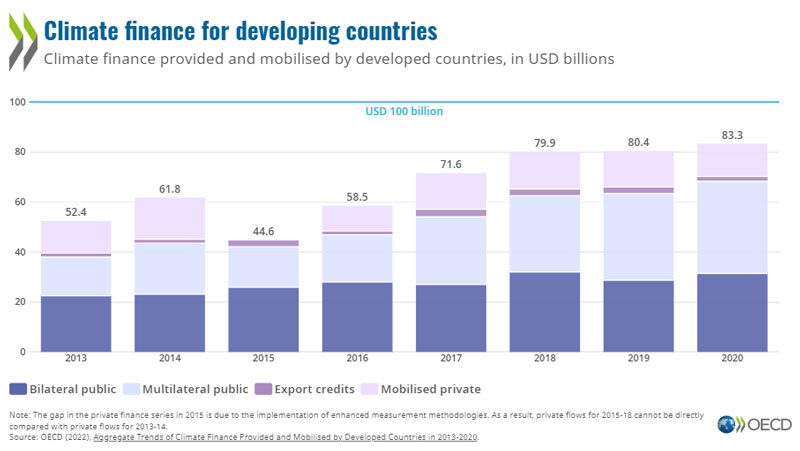 The majority of climate finance in 2020 was directed at climate change mitigation efforts, but finance provided for adaptation action continued to grow, accounting for a third of the total. Mitigation finance was mainly focused on energy and transport activities, while adaptation finance focused on activities in water supply and sanitation; and agriculture, forestry and fishing.

The goal for developed countries to provide and mobilise USD 100 billion of climate finance annually for climate action in developing countries was due to have been met in 2020 and to be sustained through to 2025. OECD scenarios released in October 2021 showed that, if all commitments put forward by bilateral and multilateral providers up to that point are delivered, the USD 100 billion level would be met in 2023 and be exceeded in the period to 2025.

The OECD will continue to analyse climate finance developments over the next few months, with the outcomes to be released in September.

Download the Report: Aggregate Trends of Climate Finance Provided and Mobilised by Developed Countries in 2013-2020

At the 15th Conference of Parties (COP15) of the UNFCCC in Copenhagen in 2009, developed countries committed to a collective goal of mobilising USD 100 billion per year by 2020 for climate action in developing countries, in the context of meaningful mitigation actions and transparency on implementation. The goal was formalised at COP16 in Cancun, and at COP21 in Paris, it was reiterated and extended to 2025.