On 13-15 September 2010, the Perspectives on Global Development 2010 Shifting Wealth report was launched in North America at the United Nations, the United States State Department, and the Organization for American States.

In New York, OECD Development Centre staff presented the report's findings, particularly on the potential for increased south-south linkages to help poor countries, at the UN Office for the High Representative for the Least Developed Countries, Landlocked Developing Countries, and Small Island Developing States (UN-OHRLLS). The Director of UN-OHRLLS, Ms. Lakshmi Puri, as well as representatives from the Delegations of India, Brazil, the United Republic of Tanzania, and the Solomon Islands provided detailed feedback and comments on the report and its findings. 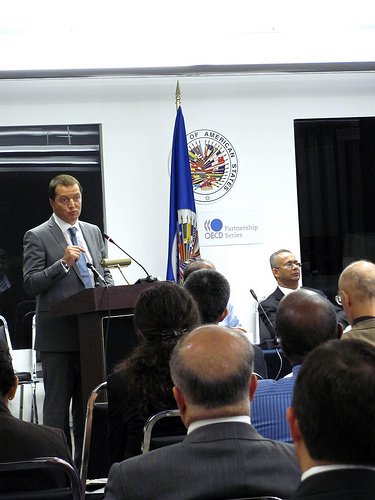 In Washington, DC, the report was launched in partnership with Organisation for American States. An event was held featuring interventions from OAS Assistant Secretary Amb. Albert Ramdin, Dr. Liliana Rojas-Suarez of the Center for Global Development, who also wrote a Non-Residential Fellow background paper for the report, and Dr. Uri Dadush of the Carnegie Endowment for International Peace. While in Washington, the report's authors also gave briefings on the report to the US State Department's Bureau of Western Hemisphere Affairs and Bureau of Economic, Energy, and Business Affairs.