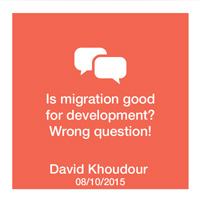 This summer’s conference in Addis Ababa acknowledged migration’s positive contribution to development. The newly adopted Sustainable Development Goals (SDGs) now take the next step of announcing migration-related targets. The SDGs recognise the need to protect the rights of migrant workers, especially women migrants, adopt well-managed migration policies and reduce remittance fees. However, international migration remains a very sensitive issue for most countries, as the current refugee crisis reveals. Such apparent schizophrenia between the international development agenda and the national policy one raises one important question: Can migration be good for development in countries migrants leave behind?

Emigration, in fact, is not a pre-requisite for development. Different countries at similar development levels present very different migration patterns. Emigrants make up about 11% of the population in Mexico and the Philippines, but only 1% in Brazil and Indonesia. These differences relate to employment opportunities generated by alternative development strategies. Countries investing in skills systems able to meet labour market needs and in social welfare register lower emigration rates on average than their neighbours. In this sense, emigration is often the result of failed development policies.

At the same time, emigration can have a positive impact on development. Remittances sent by migrants to developing countries – U.S. $436 billion in 2014 – represent more than three times the global flows of official development assistance. This stable source of financing can help reduce poverty, spur consumption, foster entrepreneurship, and increase households’ investments in education and health. Diasporas can also send collective remittances to finance local development projects or help rebuild countries after natural disasters, which is what happened after the April 2015 earthquake in Nepal. Migrants send not only money, but also social remittances. When they travel home or communicate with their families in their countries of origin, migrants often transfer the values and behaviours observed in host countries, precipitating a decline in fertility rates, increased women empowerment or a growing demand for accountable institutions. Finally, the emigration of tertiary-educated individuals can have a brain-gain effect by encouraging those left behind to study longer, hence increasing the stock of human capital.

Yet, migration can also generate negative effects for origin countries. Even though developing countries can benefit in the long run from the emigration of skilled people, the brain drain can prevent poor countries from investing in human capital. Human development is especially at risk when skilled emigration affects the education and health sectors. Although remittances help families, migration outflows can create labour shortages, especially in rural areas. This lost-labour effect can sometimes, like in Sahelian countries, exacerbate food insecurity. Emigration also has social costs. Family disintegration caused by the departure of one or both parents can in some cases leave children with psychological problems, risking school dropout and even increased violence. In the long term, emigration can even turn into a poverty trap: because emigration helps relieve the pressure on the labour market and remittances constitute a social safety net, governments may not see the need to reform labour markets and social welfare systems.

Ultimately, the development impact of migration depends on the policies in place. Diaspora bonds, financial education programmes or websites to compare remittance costs exemplify policies aimed at reducing the costs of remittances and channelling them towards productive investment. Countries of origin can also enhance the participation of emigrants by organising diaspora fairs in host countries or implementing matching funds schemes for collective remittances. Through the Mexican programme 3x1, for example, the government invests three more dollars in development projects for each dollar invested by hometown associations. Moreover, policy makers can foster brain circulation by promoting the temporary or permanent return of high-skilled migrants and consolidating scientific diasporas.

Sectoral policies too have a significant influence on the way migration affects development. For instance, social protection or education programmes, such as conditional cash transfers and scholarships to finance children’s education, can relax households’ credit constraints and allow them to redirect remittances towards productive investments. Similarly, education, investment and labour market policies can facilitate the reintegration of return migrants and increase their contribution to the development of their home countries.

The question, therefore, is not whether emigration is good or bad for development. The question is why some countries manage to go through the development process without having to send millions of citizens abroad. Development should indeed be about creating the conditions for people to decide if they prefer to stay home or leave. But thinking that emigration is a condition for development would be a big mistake. Policy makers can only try to make the best of it through adequate and coherent policies.