OECD Home DevelopmentAfrican cities can be actors of structural transformation

African cities can be actors of structural transformation 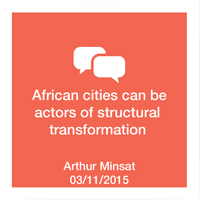 African nations are exploring how best to harness the potential of cities as agents of change to achieve progress towards the Sustainable Development Goals (SDGs) and the African Union’s Agenda 2063. The current African Economic Outlook (AEO), jointly produced by the African Development Bank, the OECD Development Centre and the United Nations Development Programme, warns that policy makers and donors too often are blind to the territorial realities of the economies they are trying to help develop. Economies are seen as sectors rather than places. And thus sectoral lenses tend to limit policy action to a few specific tools, regardless of the complexity of problems that demand a place-based, multi-sectoral and participatory approach.

Cities are a case in point. Most African countries structure their Poverty Reduction Strategy Papers (PRSP) around governance, economic growth and infrastructure but disregard regions or places. The Agence française de développement found that out of 30 African countries with PRSPs, only three – Djibouti, Guinea and Senegal – have urban strategies with relatively well-defined budgets.[1]

And yet the pace of urbanisation in sub-Saharan Africa is among the fastest in history. Africa took 50 years to urbanise from 15% to 40%, whereas Europe took 110 years to achieve the same rate of urbanisation between 1800 and 1910.[2] The rapid diffusion of urban lifestyles, together with increasing access to new technologies, is changing African societies.[3]

Consequently, while we are generally aware that urbanisation profoundly transforms African societies, too little attention is paid to cities as actors of development and structural transformation. This is all the more important in Africa’s case since what we think we know about the link between industrialisation and urbanisation is challenged both by the diversity and uniqueness of the continent’s experiences. How?

First, many sub-Saharan countries in particular have been experiencing urbanisation without industrialisation. In those cases, cities play a major role as places of consumption but often not as places of production of tradable goods. Sub-Saharan African countries have not reduced urban poverty as rapidly as East Asian ones that are going through structural transformation: about 43% of African city dwellers live below USD 1 per day, and 62% live in slums.[4] The informal economy’s workforce is estimated to account for 61% of urban employment and 93% of all new jobs created. Some categories of population are particularly vulnerable: for women in Africa, the informal economy is estimated to represent 92% of all job opportunities outside of agriculture, overwhelmingly as self-employment or own-account work.[5] This raises several questions. How can we put in place policies that help accelerate the pace of industrialisation? What should such transformation look like in cases where industry will play a lesser role than it did in the European, American or East Asian transitions?

Second, urbanisation in Africa is not coinciding with a decrease in rural population in all countries. Northern Africa, South Africa and a number of small island states like Mauritius or Cabo Verde are more advanced in their demographic transitions. They have experienced strong urbanisation rates, with declines in rural populations. But in most countries, both urban and rural populations are increasing fast in absolute terms. This is a different dynamic from the rural exodus experience that many developed economies experienced. The majority of Africa’s population is likely to remain rural until the mid-2030s, while the majority of the world’s population has lived in urban areas since 2007. Even beyond the mid-2030s, the rural population will continue to grow in absolute terms.

Third, and related, the largest part of the population growth in sub-Saharan African cities is natural. In other words, the increase is due to high fertility rates rather than migration from rural areas. So, unlike OECD and East Asian experiences of urbanisation associated with fast declining fertility rates, in sub-Saharan Africa you have fast urbanisation with slowly declining fertility rates. To illustrate, at current natural growth rates, a family of 4 rural migrants in 1960 becomes a family of fifty urbanites in Africa in 2010, compared to a family of thirty urban dwellers in Asia. This means the needs for urban investment are higher in Africa than in Asia, although African cities are less wealthy than Asian ones.[6]

So what should proactive urbanisation policies look like in such differing contexts? What is the optimal size of mega cities before the costs of congestion exceed the benefits of agglomeration? How can multi-level governance be improved? How can the power of mayors be enhanced to deal with increasingly complex challenges on the ground? These are some of the issues that we explore in the forthcoming African Economic Outlook 2016.

We want to explore these questions by comparing Africa’s experiences with country experiences from Asia, Latin America and Europe. Nurturing sustainable cities in Africa to facilitate structural transformation will be the centrepiece of several international discussions. The subject will be front and centre in achieving the pan-African vision of Agenda 2063; in continuing the momentum gained with the African Common Position on the post-2015 development agenda regarding, in particular, SDG11 on cities and human settlements; and in furthering a deeper understanding of the opportunities and challenges of Africa’s urbanisation at the United Nations Conference on Housing and Sustainable Urban Development scheduled for October 2016 in Quito, Ecuador. Indeed, now is the time to prepare for Africa’s unprecedented urban transition.