Even though the growing middle class in Latin America is becoming an engine of economic progress, this group remains economically vulnerable when compared with high income OECD countries, according to the OECD Development Centre’s Latin American Economic Outlook 2010.

‘A growing and vibrant middle class is a sign of good economic prospects in Latin America,’—said Ángel Gurría, Secretary General of the OECD —‘However, Latin Americans in the middle of the income distribution still face serious hurdles in terms of purchasing power, education and job security. These groups still have some way to go to be fully comparable to the middle classes in more advanced economies.’

Therefore, Latin American governments must ensure that they do not fall down the economic ladder. Labour market informality remains high among this segment of the population. As informality goes hand-in-hand with low social-protection coverage, fewer than half of these workers will benefit from a social safety net when they get old or lose their jobs. In Chile, 39% of the population within this group does not contribute to any pension scheme. This goes up to 52% and 67% in Brazil and Mexico, respectively, and to an astonishing 95% in Bolivia.

Size of the middle sector in Latin America

(as percentage of total households) 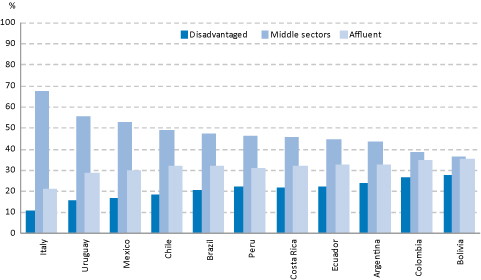 Education is the surest way to lift children to higher social and economic levels, but the ability of education systems in Latin America to boost social mobility remains very limited in comparison to other countries. The quality of the education received is closely linked to the socio-economic background. A Latin American with illiterate parents is 10 times more likely to be illiterate than he is to finish university.

There is normally a direct correlation between a sizeable and relatively prosperous middle class and long-term growth, greater equality and less poverty. However, high levels of labour informality, low coverage of social-protection programmes and limited fiscal resources to improve public services could cancel-out the possible benefits in Latin America. Reducing the economic vulnerability of Latin Americans who have reached a middle income level and ensuring that more Latin Americans can move up into this level are worthy objectives of public policy.

To hedge the risks going forward, the OECD Development Centre recommends three actions to governments: consolidate the position of the middle sectors by extending social-protection; foster upward social mobility through education; and strengthen the social contract by improving the quality of public services such as health and education.

Concrete instruments that policy makers in the region should consider to protect the most vulnerable people within these middle sectors include extending social pensions, compulsory (or semi-compulsory) affiliation for the more educated self-employed, greater flexibility regarding contributions and withdrawals, and matching defined contributions (transfers made by the state to an individual’s pension plan).

Instrument for creating more opportunities for upward mobility through more and better education include investing more in early childhood development; increasing the quality of public education, through measures such as better administration of schools, a modern system of evaluation, better recruitment and training of teachers as well as better incentive systems; and financing tertiary education through grants and loans.