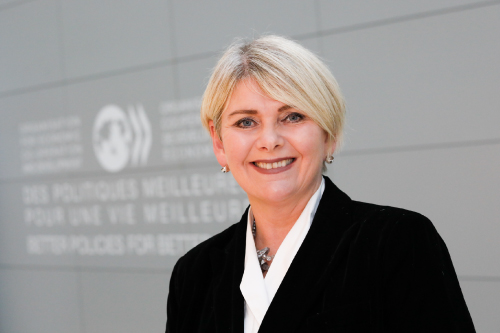 Ragnheiður Elín Árnadóttir has been the Director of OECD Development Centre since 16 August 2021.

Ms. Árnadóttir served as Minister of Industry and Commerce in Iceland from 2013-2017 and was an elected Member of Parliament for the Independence Party from 2007-2016.

Before being elected to Parliament, she was successively a political advisor to the Minister of Finance, the Minister of Foreign Affairs and the Prime Minister. She also worked for the Trade Council of Iceland both in New York and in Reykjavík.

A nonresident Senior Fellow at the Atlantic Council's Global Energy Centre, she is also a Board member of RÚV (Icelandic National Broadcasting Company) and of the American-Icelandic Chamber of Commerce. She was the Chairman of the Board of Directors of Duty Free Iceland, and a member of the Board of Directors of Landsvirkjun (national power company).

Ms. Árnadóttir has a Master’s Degree in Foreign Service from Georgetown University in Washington, D.C., and a Bachelor’s Degree in Political Sciences from the University of Iceland. She attended the Georgetown Leadership Seminar in 2007, by invitation.