Paraguay becomes the 52nd member of the OECD Development Centre

02/03/2017 - Paraguay’s entry into the OECD Development Centre marks a significant stride in support of the country’s inclusive growth and reform agenda. It also strengthens the Centre’s global representativeness and institutional co-operation with Latin America and the Caribbean.

Paraguay joins a group of 51 OECD and non-OECD countries, contributing to an expanding membership of the Development Centre. The European Union also participates in the work of the Centre.

The country has made remarkable progress in improving its macroeconomic framework, balancing growth and consolidating its social agenda, while furthering the implementation of international good practices and standards of public policy.

With an average GDP growth of 5.1% between 2006 and 2015, Paraguay has the second strongest growth performance in South America. And despite some downside risks, growth projections for the country in 2016 (4.0%) and 2017 (3.8%) show that Paraguay remains above the regional average. Also, important improvements in social development include better life expectancy, educational attainment and per-capita income. 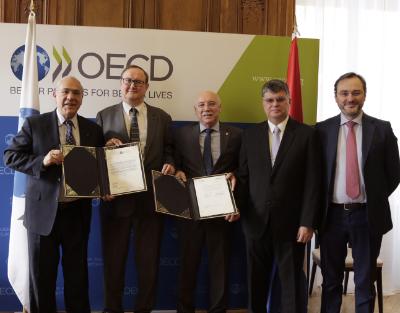 Following up on the visit of the President of the Republic of Paraguay, Horacio Cartes Jara, who addressed OECD and Development Centre Members at a Special Session of the Centre’s Governing Board last December, Eladio Loizaga, Minister of Foreign Affairs of Paraguay, and José Molinas Vega, Minister of Planning for Economic and Social Development, participated today in the signing ceremony with an exchange of letters that formally endorsed Paraguay’s entry into the OECD Development Centre.

“Paraguay’s improvements in the areas of poverty reduction, inclusive growth and international integration offer opportunities for knowledge sharing and policy dialogue with other Members of the Centre,” stated Pierre Duquesne, the Chair of the OECD Development Centre Governing Board and Ambassador of France to the OECD.

Paraguay joins ten other Members from Latin America and the Caribbean, including Argentina, Brazil, Chile, Colombia, Costa Rica, the Dominican Republic, Mexico, Panama, Peru and Uruguay. It will leverage the Centre’s key activities, including through the OECD Latin America and the Caribbean Regional Programme launched in 2016, by hosting the next Ministerial meeting of the Programme specifically on social inclusion in November 2017. Paraguay also will strengthen ties with policy makers throughout the region to address some of its more pressing needs such as increasing productivity, fostering social inclusion and strengthening governance and institutions.

The Development Centre has been conducting analyses of the Paraguayan economy notably in the framework of the Latin America Economic Outlook, Tax Revenue Statistics, Taxing Wages, and the Social Institutions and Gender Index (SIGI). It is also undertaking a Paraguay Multi-Dimensional Country Review (MDCR), a horizontal project involving several OECD directorates to assess the country’s main constraints for long-term development and to provide policy recommendations for the way forward in line with the country’s National Development Plan.

Mario Pezzini, OECD Development Centre Director and Special Advisor to the OECD Secretary-General on Development, strongly welcomed Paraguay’s entry as an “opportunity to assist the country in identifying policy priorities and defining a strategy for further engagement with the OECD in the future.”

In addition to longstanding relations with the Development Centre, Paraguay enjoys fruitful co-operation with the OECD through its contribution to tools and fora, including the Base Erosion and Profit Shifting (BEPS) Project, the Global Forum on Transparency and Exchange of Information for Tax Purposes, the Programme for International Student Assessment (PISA) for Development project, the How’s life in Latin America Initiative, and the OECD seed scheme. More recently the country joined the Development Policy Dialogue on Women's Economic Empowerment.

For more information on the OECD Development Centre, visit www.oecd.org/dev.

Media enquiries should be directed to Bochra Kriout (Bochra.Kriout@oecd.org; +33-1 45 24 82 96) at the OECD Development Centre Press Office.