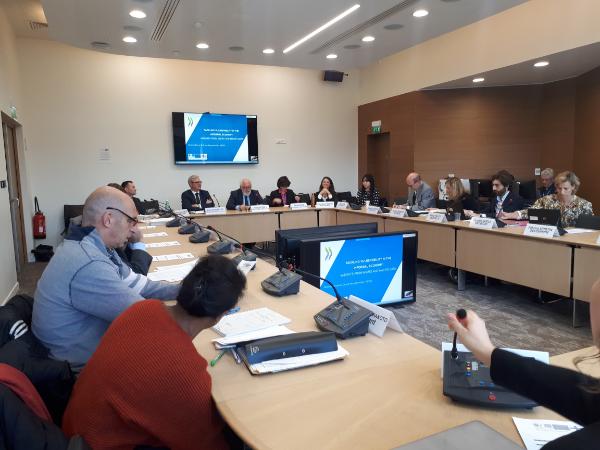 FRANCE, OCTOBER 2018. Experts on social protection from the OECD, the European Commission, the ILO and the World Bank gathered in Paris on 8 October 2018, to discuss ongoing research on the informal economy. The meeting revolved around further understanding and addressing informality, a reality for over 60% of workers worldwide and which is strongly correlated with poverty and vulnerabilities.

After the introductory remarks by Mario Pezzini, Director of the OECD’s Development Centre, the meeting was divided in two sessions. The first session focused on the draft of the EU SPS forthcoming report “Tackling Vulnerability in the Informal Economy”, which was presented by Head of the Social Cohesion Unit at the OECD Alexandre Kolev and by ILO Senior researcher Florence Bonnet. Discussants recognised the valued added of the research, especially in terms of acknowledging the heterogeneity of informality and differentiating degrees of vulnerability, and provided feedback on how to frame and implement the findings within social protection’s bigger picture.

The second session focussed on the newly consolidated OECD Key Indicators of Informality based on Individuals and their Household (KIIBIH) database, currently comprising 27 countries in 4 Regions and 45 indicators. After EU SPS team members Caroline Tassot and Justina La presented the main features and potential policy making uses of the KIIBIH, attendees discussed how to move forward with the database. Experts agreed upon the usefulness of the harmonised database to monitor informality, particularly shedding light to the previously unknown household dimension. It was suggested the database could be extended to more countries and potentially used to analyse the volatility of informality throughout the lifecycle.

The feedback provided and the issues discussed, will be taken into account for the final informality report, which will be published early 2019, and for the scale up of KIIBIH in the near future.