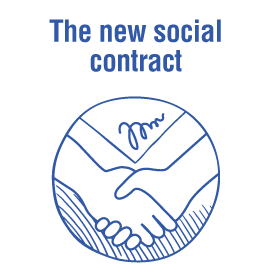 The unprecedented wave of protests that shook the world at the end of 2019 revealed deep cracks in the relationship between citizens and institutions in many countries. We explore ways to restore trust and reimagine a new social contract, starting with how countries can involve citizens’ voices in the design of national strategies and widely experiment citizen-driven development initiatives. This includes updating the outdated social contract between employer-employee, and broadening social protection systems to informal workers. We also look at how to increase financing of public services as countries seek to recover from the COVID-19 crisis, in a context of increasingly narrow fiscal space.

How to design a new social contract in Latin America? From theory to action

Moderated by Ambassador Alejandra De Bellis, Permanent Delegate of the Oriental Republic of Uruguay to UNESCO and to the OECD, with introductory remarks by Carlos Malamud, Senior Analyst, Elcano Royal Institute and by Mario Pezzini, Director of the OECD Development Centre, and concluding remarks by José Juan Ruiz, Chairman, Elcano Royal Institute.

When COVID-19 hit, Latin American and the Caribbean was already in a fragile state. Social vulnerability had increased throughout the continent, productivity was low, and institutional instability had reached an all-time high due to growing social discontent and polarisation. Now the pandemic has exacerbated all of these issues, widening inequalities and pushing millions into poverty. In this context, the need to question and transform the region’s development model seems unavoidable.

Moderated by Julia de Ipola, Analyst of the Americas Programme at Groupe d’Etudes Géopolitiques, with introductory remarks by Sybel Galván Gómez, Ambassador, Permanent Representative of Mexico to the OECD (TBC).

Whether as front-line health workers, caregivers or in other highly exposed or informal sectors, women are bearing the brunt of COVID-19. Additionally, they have seen a massive increase in unpaid care and domestic responsibilities. In short, COVID-19 is a gendered crisis, and gender must be central to our economic recovery. However, models of economic recovery, namely those used in Latin American countries, tend to focus mainly on male-dominated sectors.

Women and conflict in West Africa

Moderated by Laurent Bossard, Director of the Sahel and West Africa Club Secretariat

Conflict has become more violent and widespread in West Africa with increasing numbers of civilian casualties, particularly in Central Sahel and Nigeria. Women pay a heavy price. In times of crisis, gender inequalities are exacerbated. Women and girls face heightened risks of violence and access to essential services is extremely limited. Yet women and girls should not only be seen as victims of conflict.

Rethinking the social contract in LAC: between institutions and civil society

Moderated by Mario Pezzini, Director of the OECD Development Centre.

In recent years, a wave of protests, spurred by widespread discontent, unfurled across Latin America and the Caribbean. Increasing inequalities and opportunity gaps, as well as a lack of effectively designed and implemented public policies, have increasingly led citizens to distrust public institutions, ultimately eroding the foundations of the social contract.

Debt sustainability and COVID-19: what's next for Africa and Latin America?

Moderated by Mario Pezzini, Director of the OECD Development Centre.

The COVID-19 crisis poses a great challenge to fiscal sustainability in developing countries. In Africa and Latin America and the Caribbean (LAC), many countries faced socio-economic vulnerabilities, weakening financial conditions and rising debt levels prior to the breakout of the pandemic. The shock will amplify through these channels and have a disproportionate impact on these countries’ current situations and future development perspectives.

Women play a pivotal role in a wide range of activities supporting food and nutrition security. They are the powerhouses of the Sahel and West African food economy. Two-thirds of employed women work across the food system, playing an especially important role in off-farm segments of food value chains. Nevertheless, access to affordable and nutritious foods is beyond the reach of many women and girls. Low income and education levels as well as discriminatory laws, social norms, and practices such as those revealed in the Social Institutions and Gender Index (SIGI), drive food insecurity among women by curbing their ownership over assets such as land, water and energy as well as access to financial services, social capital, information and technology, agricultural inputs and services.

Threats to democracy: can philanthropy sit on the sidelines?

The COVID-19 pandemic has triggered an unprecedented stress test for the stability of political institutions and countries’ governance capacity. According to the 2020 Bertelsmann Stiftung’s Transformation Index (BTI), the pandemic will contribute to increase the concentration of power in the executive branch, accelerate an erosion of the rule of law and restrict political rights such as freedom of assembly and expression. It will increase severe fiscal and monetary instabilities and have a particularly severe impact on the weakest members of society, thereby increasing poverty and inequality.

The expansion of social protection programs in Latin-America in the context of COVID-19:
towards a new social contract? Experiences from Colombia, Ecuador, Brazil and Peru

Moderated by Sebastian Nieto Parra, Head of Latin America and the Caribbean of the OECD Development Centre

The COVID-19 crisis is generating a profound impact on the most vulnerable groups in Latin America and the Caribbean. In these circumstances, governments of several countries have adopted measures to strengthen their social safety nets, both through an expansion of existing channels and the creation of new instruments of support to reach groups that have been left unprotected in the context of the pandemic.