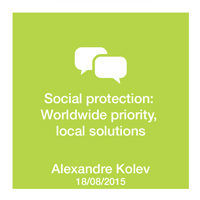 By Alexandre Kolev, Head of the social cohesion unit at the OECD Development Centre

The past decades have seen the dramatic expansion of social protection programmes in developing countries. Today, about 2 billion people in developing countries have access to social safety net programmes. Virtually all countries, even some in fragile contexts, have interventions in place that aim to address consumption deficits, and some middle income countries, especially in Latin America, have introduced cash transfers to encourage human capital development. Conditional cash transfers now exist in 64 countries, a dramatic increase from 2 countries in 1997 and 27 in 2008.

The recent rise in social protection has been fuelled by overwhelming evidence that social protection schemes deliver real results. Numerous evaluations around the world -- 86 alone between 2011 and 2015 -- show positive impacts, including a reduction in poverty by 50% for the most successful cases, increased household income and consumption, better health and education, and increased investment in productive assets and savings.

Although less well-established empirically, social protection is also increasingly seen as a tool that can contribute to overall economic growth, human well-being and social cohesion. Developing countries spend an average of 1.6% of GDP on social safety net programmes, with an overall level of spending in 120 developing countries representing twice the amount needed to provide every person living in extreme poverty with an income of US$1.25 a day. In recent years, many emerging economies, including Brazil, Indonesia and South Africa, have invested significantly in social protection to reduce poverty, raise domestic consumption and promote a fairer distribution of the opportunities generated by growth.

"Because of this evidence, social protection is a fundamental element in the post-2015 development agenda."

Now, for social protection to realise its potential in the framework of the Sustainable Development Goals, the challenges of expanding coverage will need to be addressed. Coverage in low-income and lower-middle income countries remains limited. Only about one quarter of the poorest quintile have access to some kind of safety net, while nearly half of the population over pensionable age do not receive a pension. Some 90% of the population in low-income countries remain without any health coverage. The barriers to extending inclusive social protection systems are real: limited fiscal space and large informality to fragmented responsibilities and weak implementation mechanisms, poor governance and administrative capacity, the absence of appropriate management and information systems, insufficient knowledge and data, and the lack of policy coherence.

Take Viet Nam, for example. An in-depth review of Viet Nam’s social protection system carried out by the OECD Development Centre in 2014 shows that in the past decade public spending on social protection increased overall but several gaps remain between coverage of the most disadvantaged and the better off. Programmes targeting vulnerable groups still miss about 40% of the poor. In addition, among those covered by social insurance, only 3.5% belong to the bottom 20% of the income distribution, while 45% were among the top 20%. These empirical findings point to the real need for equitable delivery of social protection services, in addition to budget sufficiency. They provide further evidence to support Viet Nam’s ongoing efforts to improve social protection coverage and the quality of service delivery.

Prioritising social protection is key to solving domestic and global development problems. Yet, no one single model for how countries can build inclusive social protection systems exists. The success of social protection around the world depends very much on individual domestic contexts and maximising national capacities and political consensus.