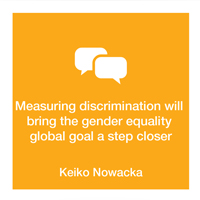 This article first appeared in The Guardian on September 28, 2015. Read it anew here.

A warning often repeated since the Rio+20 summit is that lessons learned from the millennium development goals (MDGs) should not be forgotten when the sustainable development goals (SDGs) – the new development framework adopted at the United Nations general assembly – replace them. Such concerns seem warranted given the mixed report card on the MDGs.

While there were substantial improvements in poverty reduction and education, other goals showed patchier progress. The MDGs were praised for focusing the development community’s attention on eight priority areas, but also criticised for leaving out other key sectors. Many lessons have been learned over the past 15 years on how to make development more effective and help those most in need. As we look to the next 15 years, which of these key lessons should we take to heart to turn the promises of the SDGs into reality – particularly when it comes to gender equality and women’s empowerment (MDG3)?

First, focus matters. A standalone goal on gender equality has been retained (SDG5). A dedicated goal makes a big difference in mobilising action and resources. Furthermore, SDG5 includes many ambitious targets left out of MDG3. Tackling gender-based violence, unpaid care work, early marriage and harmful practices, among others, are now high on the gender and development agenda.

Second, strong indicators that can monitor the SDG commitments, inform policy action and ensure accountability on gender equality are just as important. After the adoption of the SDGs, all eyes will be on the selection of indicators to track progress on the 17 goals and 169 targets. Over the past year, representatives from governments, UN specialised agencies and international organisations, such as the Organisation for Economic Co-operation and Development (OECD), have worked on establishing a list of provisional indicators, which will be adopted at next year’s 46th UN statistical commission. While this list shows how much better we have become at measuring complex areas, gaps in data coverage and availability present real challenges to the SDG enterprise.

Indicators and data on gender equality are a case in point. A data revolution, strengthened national statistical systems and other statistical initiatives have already given us a very detailed understanding of remaining gender inequalities in the labour market or in education, just to cite two areas, and what policy interventions have worked to reduce them. Still, so much is not captured systematically by regular social or economic surveys, which are critical for measuring gender equality, and also for tracking progress towards SDG5. Here, the MDGs taught us another valuable lesson: what gets measured, gets done.

Addressing discriminatory social norms and institutions has become a new development priority and features strongly across the SDG5 targets. Yet, this area needs much more statistical work and investment. Data reveals how formal and informal laws, practices and attitudes shape women’s ability to enjoy their rights and take advantage of empowerment opportunities.

Results from the OECD Development Centre’s Social Institutions and Gender Index (SIGI), for example, highlight how a discriminatory social practice such as early marriage adversely affects girls’ educational attainments, or how an unequal share of unpaid care work between women and men can exacerbate gender wage gaps. These examples demonstrate the value of including targets in the new framework; quantifying and measuring discrimination against women is challenging, but possible.

Indeed, the OECD Development Centre recently completed its first SIGI survey in Uganda, where new data on social norms was generated for the first time at the local level, providing evidence on how these norms can exacerbate inequalities despite the introduction of gender-sensitive laws. The survey showed that one-quarter of Ugandans agree that women and men should not enjoy equal land rights. Close to half of the population (45%) agree that early marriage is acceptable for girls (but not for boys). Such data is critical and a valuable resource for identifying how to make laws more efficient, and target the root causes of inequalities between women and men.

So what will it take to step up to this statistical challenge? Financing and technical support for statistical agencies is key. Most of the proposed indicators for SDG5 are classified as tier two (methodology exists, data not easily available) or tier three (methodology needs to be developed). For example, unpaid care work is measured through time-use surveys. However, less than half of the world’s countries have conducted such surveys in the past 10 years. Designing surveys, harmonising methodologies to ensure cross-country comparability or including indicators in existing surveys can be costly. Worryingly, this summer’s Financing for Development conference in Addis Ababa did not include increased commitments for statistics, even though it is estimated that at least an additional $200m (Paris21) is needed.

The silver lining is that data on gender is getting better all the time. We now know much more about the prevalence of and attitudes towards violence against women than in 2000, thanks to demographic and health surveys. Political will has proved critical too. Colombia and Uruguay, for example, have passed legislation to mandate regular time-use surveys. Innovative projects, such as the Evidence and Data for Gender Equality initiative led by agencies, including the World Bank, UN statistics directorate, UN Women, the OECD and the Food and Agriculture Organisation, have shown exciting results in advancing our knowledge of women’s asset ownership through new approaches and thinking around data collection. This is promising for future measuring of results for the SDGs: more reliable data and innovative methodologies will help truly capture and track women’s empowerment in the home, the workplace and in public life.

While these investments in indicators and data may appear formidable, the promise of a high return if we are able to achieve SDG5 by 2030 is certainly worth it.