Global Skill Partnerships: A proposal for technical training in a mobile world 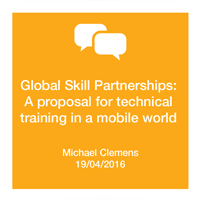 Migration can have benefits for everyone involved, but this is far from automatic. It requires new institutions, institutions designed for a world that moves. We propose Global Skill Partnerships (GSP) as a new way to make skilled migration more beneficial to migrant-destination countries, origin countries and migrants. A GSP is an up-front agreement between employers and/or governments in destination countries and professional training centres in origin countries. These parties agree on a practical and equitable way for the benefits of migrants' professional service at the destination to finance training at the origin — training for both migrants and non-migrants. Such an agreement allows mutual gains by taking advantage of large international differences in both professional earnings and training costs.

An Example: Nurse Training and Employment

Within a decade, Europe will require hundreds of thousands more nurses than it is likely to train [1]. Nurses will and must move in large numbers to Western Europe from other countries, including those in Eastern Europe. But Eastern Europe critically lacks nurses, [2] while Eastern European youths crave opportunities in skilled employment. How can nurses trained in Eastern Europe move in a way that benefits both regions?

A new type of nurse training could address these problems. A GSP is a bilateral agreement designed to facilitate nurse training in Eastern Europe. Some of its graduates could migrate to work in Germany —either temporarily or permanently — while others remain to work at home. Those who migrate typically earn ten times more than those who do not,[3] because their economic productivity is vastly greater at the destination than at the origin.

Not only are destination-country wages higher, origin-country training costs are lower. Just a small part of this dual arbitrage opportunity can finance training for migrants and non-migrants. The gain can be captured either by destination-country governments, by the employers, by the migrants (as a kind of student loan) or some combination of these.

Here is one example of how a GSP might work:

Maria and Ion are two young, low-income Moldovans who train as Registered Nurses in Chisinau. Maria plans to work in Germany, Ion in Chisinau. Training each of them costs €3500 per year in Moldova. A private hospital group in Germany agrees to finance two years of Maria’s training in Moldova, before bringing her to Germany for a final year of training, as well as financing half of Ion’s full training in Moldova. The total training cost in Moldova is €12250. In return, Maria commits to work within the German hospital network for at least four years.

Observe the consequences of this arrangement: Germany gains a nurse (Maria) whose net earnings are still about ten times what she could earn in Moldova; the German employer gains a profitable employee and saves tens of thousands of euros from supporting Maria’s first two years of training in Moldova rather than in Germany; Moldova gains a nurse (Ion) with a sizeable free scholarship; two low-income Moldovans get professional careers that might be otherwise inaccessible; Moldova expands the capacity and quality of its nurse training facilities, creating benefits that spill over into the rest of the health sector; and there is no cost at all to the German or Moldovan governments. Other benefits to Moldova could arise if Maria chooses to remit some of her earnings home, or to return one day to work in Moldova. But the arrangement remains mutually beneficial if she does not.

These all-around benefits are possible for two simple reasons: 1) a nurse’s labour is worth enormously more money in Germany than in Moldova, and 2) it is much less expensive to train a nurse in Chisinau than in Germany. A GSP turns those two facts into an engine of human capital creation. And the framework could be flexibly adapted to different settings: First, GSPs could include nursing assistants and personal care workers, in addition to or instead of full professional nurses. Second, they could begin with health professionals, but the same framework could later be applied to various types of training to fill semi-skilled and skilled labour shortages in Germany.

GSPs could be financed differently than the above example. Initial finance could come either from the German government, from private-sector employers or both. Employers who cover migrants’ training costs should be compensated either by a subsequent work commitment or by repayment following migration. Regardless, training requires little or no up-front cost to students and is thus accessible to Moldovans of any income level. Training for migrants costs Moldovan taxpayers nothing, reducing fears of brain drain or fiscal drain. Graduates who do not migrate pay much lower tuition, heavily subsidized by a small portion of migrant graduates’ earnings.

GSPs could become privately profitable and self-sustaining, with no ongoing cost to taxpayers either in Germany or Moldova. But they require initial co-operation and support from policy makers on both sides. This mutual support must arise from the prospect of mutual benefits. The gains for Moldova (and savings for Germany) largely emerge from conducting some of the nurse training in Moldova. The initial involvement of policy makers on either side, which may require multiple ministries working together, can include the following:

Nursing offers just one example of a field where a GSP could be arranged. Other forms of technical training could also be suitable — including basic information technology services and skilled trades such as heating systems maintenance. Moldova and Germany, too, are just one example of many country pairs where wage and training cost differentials are more than large enough to power a GSP. Designed correctly, a GSP can provide both good jobs and professionals to the destination country and the origin country, without harming the public coffers or health systems of the country of origin. This is a better way to strengthen developing nations’ employment markets versus blocking the migration of skilled people.

[2] The World Health Organization Country Cooperation Strategy for Moldova lists “brain drain…in the health workforce” as one of its principal challenges. Approximate number of practicing professional nurses and midwives per 1000 residents: Germany 12; France 9; Moldova 7; Bulgaria 5 (WHO Global Atlas of the Health Workforce).