Can the G20 make a difference for development? 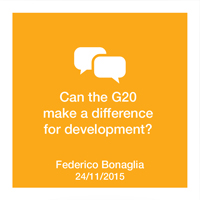 By Federico Bonaglia, Senior Counsellor to the Director at the OECD Development Centre

Can the G20 really make a difference for development? The short answer is yes. The long answer is that the G20 can actually do more and should not miss the opportunity offered by the SDGs to deepen its engagement on global development. How can we upgrade the development agenda? In a two-part Development Post, the author explores the first question here. Look for a second submission that delves into the G20’s forward-looking agenda for development.

With the tragic Paris events weighing on their minds, G20 leaders gathered in Antalya last week and reaffirmed their commitment to strong, sustainable and resilient growth for all, including low-income and developing countries. Why does this matter for development and the recently approved Sustainable Development Goals? The reasons are substantial. First, the sheer size of the G20 economies and the transmission mechanisms that link their actions, or inaction, to the development prospects of the rest of the world cannot be ignored. Second, G20 leaders possess convening and agenda-setting power and their like-minded approach to development demands attention. Third, the value of each G20 country’s own respective development experiences can contribute to inform developing countries in their efforts.

Indeed, development has a special place in the G20. Different from other fora, the G20 has not evolved into a pledging platform for development initiatives. Just think of the 2005 G8 Gleneagles Summit, with its ambitious plans to double aid and undertake massive debt relief, or other G7/G8 initiatives on water (Evian), food security (L’Aquila), maternal health (Muskoka) or the Middle East and North Africa transition (Deauville). The G20 countries representing 85% of the world’s GDP are focusing instead on promoting an enabling global environment to spur development and enhance the role of developing countries as new poles of growth[1].

For its part, the OECD has been involved in the design and implementation of the G20 development agenda since the adoption of the G20 Seoul Multi-year Action Plan on Development. And the G20’s own progress reports offer information on whether commitments in the development field are on track. Consider the impact of some of the G20’s actions on developing countries:

Lifting G20 growth: The Brisbane Growth Strategies, which outline structural reforms to lift growth in each G20 country, would raise G20 GDP by roughly 2.1% by 2018 if fully implemented and have potential spill-over effects on developing economies. Lifting the growth of G20 countries – or failing to do so – will ultimately affect developing countries through trade, investment, migration and technological channels.

Coordinating macroeconomic policies: Macroeconomic coordination is likely to have – at least in the short term – a much larger effect on developing countries than structural reforms in G20 countries. While we understand the implications of these policies for the G20, the implications for developing countries, through interest rates, global liquidity and capital flows, have yet to be fully explored.

Reforming the international tax system: Developing countries stand to benefit from the G20-OECD Base Erosion and Profit Shifting (BEPS) project, set to end double non-taxation of multinationals and increase transparency through the automatic exchange of information. G20 leaders’ call to action to strengthen tax capacities by offering officials as Tax Inspectors Without Borders or supporting the strengthening of tax revenue statistics is welcome. These measures will help developing countries harness the potential created by reforms to the global tax system, such as tackling tax evasion and reducing tax loopholes.

Enhancing global food security: The G20 Action Plan on Food Security and Sustainable Food Systems is the culmination of five years of intense discussions and initiatives. Since its inception, the G20 debated the volatility of commodity prices and lagging agricultural productivity growth. It convened relevant organisations to develop a consensus on causes and possible remedies and established a global monitoring system for food stocks. This plan has the potential to help advance food security in developing countries and globally.

Sharing knowledge: Many G20 development deliverables are global public goods and contribute to knowledge sharing. These are distilled into databases and toolkits to support better policy making in developing countries. Consider, for example, the development of indicators on skills and of toolkits to design inclusive green growth strategies or enhance agricultural productivity.

Assessing the impact of G20 actions on development outcomes is not easy and, to the best of our knowledge, no rigorous attempt has been made so far to that end. Challenges include:

Yet, efforts to address some of these concerns have been made. The Turkish presidency released a framework mapping the whole-of-G20 contributions to development. But given such challenges, the yardsticks to identify impact will have more to do with the convening and consensus-building power and the effective implementation of commitments rather than quantitative economic assessments. Closely monitoring implementation and involving developing countries in discussing the G20’s development agenda and its impacts will have to remain a priority for future presidencies.

[1] In 2010, G20 leaders acknowledged that “narrowing the development gap and reducing poverty are integral to [the] broader objective of achieving strong, sustainable and balanced growth and ensuring a more robust and resilient global economy for all.”