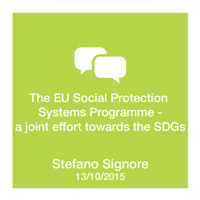 Adoption of the SDGs – the new development agenda

In September 2015, the world celebrated the long-awaited adoption of the 17 Sustainable Development Goals (SDGs) by the UN General Assembly. The endorsement serves as a starting point to a new development agenda for the next 15 years with the promising ambition to leave no one behind at its centre. The intention is a real labour of Hercules as we are talking about several groups of 1 billion people: 1 billion that continue to live on less than $1.25 a day, 1 billion aged 15 and above having either no schooling or an incomplete primary education, 1 billion migrants worldwide, and close to 1 billion, who are suffering from malnutrition in rural areas predominantly.

At the same time, the universal and integrated SDG agenda marks a new era for social protection. The shadowy existence that it was doomed to play in the context of the Millennium Development Goals (MDGs), which made no single reference to social protection, has come to an end. The international community now recognizes the importance of social protection’s cross-cutting policy approach to make a real difference for real people. Social protection is placed prominently across the 17 goals. It finds explicit mention, namely in SDGs 1, 5 and 10, when it comes to its main impacts of tackling poverty and inequalities within populations and individual households. Widespread evidence demonstrates that social protection can contribute to the achievement of the SDGs in terms of human capital development, social risk management, social cohesion, macroeconomic resilience and the promotion of inclusive economic growth. Overall, social protection contributes to at least three-quarters of the SDGs.

Social protection recognized within the global context of quadruple A

July’s Addis Ababa Action Agenda (AAAA) likewise assigned an important role to social protection within the global framework for financing development in the SDG era. To be able to deliver by 2030 appropriate social protection systems for all, which notably include poor and vulnerable groups, the conference’s outcome document calls for a new social compact. Its paragraph 12 further elaborates on this point by highlighting the necessary close relationship between social protection policies and their (domestic) sources of financing. It requires social protection systems to be more comprehensive and coherent and to be characterised by effective and efficient programmes and mechanisms and by high-quality administrative and technical services. The paragraph also reminds us of the importance of country-led and owned approaches, requiring foremost national agreements and the common pursuit of values and interests.

Altogether, the emerging positive profile of social protection is highly welcomed, but at the same time it entails an obligation to deliver results. But what exactly is it that the SDGs require us to deliver between now and 2030?

Admittedly, the SDGs are very broad and not easy to attain. Their complex set of targets acknowledges that economic growth as a unidimensional factor for prosperity has proven ineffective in reducing poverty and generating inclusive growth. On the contrary, the world is witnessing increasing inequality with regard to income and other factors. And the majority of the extreme poor today, remarkably, live in middle-income countries.

The September 16th kick-off meeting of the European Union Social Protection Systems (EU SPS) Programme at the OECD in Paris confirmed that these challenges caused by the vague and ambiguous concepts of the SDGs are well-known and a cause for concern in political and academic thinking in the field of social protection. About 100 renowned experts and representatives from academia, development organisations and 10 partner countries[i] in sub-Saharan Africa and Central and Southeast Asia gathered to launch the programme – an EU-funded flagship global thematic project, co-financed and jointly implemented by the OECD Development Centre and the Government of Finland in collaboration with institutions from these 10 beneficiary partner countries. Together, they discussed critical challenges that social protection systems have to overcome to fulfil their potential and contribute to attaining the SDGs.

The event neither intended to deliver, nor is capable of delivering, a blueprint for an implementation strategy on how to strengthen the systematisation of social protection in partner countries. As a major result of the lively debate, however, it became abundantly clear that research, sustainable financing and capacity strengthening represent the initial building blocks for a robust social protection system. To achieve the SDGs, further endeavours will be necessary to leverage the impact of social protection through more joint efforts across sectors.

This implies the establishment of a dialogue on development models and redistributive policies in particular with those governmental entities responsible for macroeconomics and public budgeting. Moreover, strengthened linkages of cross-sectoral strategies and budgets correspond strongly to the cross-cutting character of social protection.

Depending on the sector, social protection can support many policy areas with in-cash or in-kind transfers, which are two of its fundamental instruments. Each has its own raison d’être and specific procedures for effective implementation. In developing economies, cash transfer programmes have attracted the attention of academia, resulting in an impressive volume of evidence in this area. Concerning in-kind transfers in the health and education sectors, or macro-level effects of social protection programmes, more evidence of their impact on poverty and inequalities is needed. Policy makers particularly appreciate externally validated evidence as it provides a solid basis upon which to transform scientific evidence into action.

In this regard, the messages conveyed at the Paris kick-off meeting should inspire the entire implementation phase of the programme. As a final outcome, nationally generated evidence should support the adoption of socially fair and equitable policies and programmes and their effective implementation in all 10 partner countries. Generating greater knowledge for effective implementation of the SDGs precisely matches the demand to fulfil our major promise: to leave no one behind.