Presentation of the Latin American Economic Outlook 2010 in Beijing

Under the theme of “Post-Crisis: Finance and Technology Innovation”, “CASS International Forum: Latin America and the Caribbean in 2009-2010” was held at the Academic Hall of Chinese Academy of Social Sciences (CASS) in Beijing on March 26th, 2010. The forum is the only international academic symposium annually held to discuss the situation of Latin America and the Caribbean (LAC) in China. The 2010 international forum was organized by Bureau of International Cooperation and Academic Division of International Studies of CASS, as well as the Organization for Economic Cooperation and Development (OECD) and operated by the Institute of Latin American Studies (ILAS) of CASS. Mr. Cheng Siwei (Vice-Chairman of the Standing Committee of the Ninth & Tenth National People’s Congress of China), Prof. Li Yang (Vice-President of CASS) and Mr. Jose Antonio Garcia Belaunde (Minister for Foreign Affairs of Peru) attended and addressed the opening ceremony.

Mr. Cheng Siwei pointed out in his speech that in order to realize the rebalance of global economy through innovation during the post-crisis period, six pairs of balanced relations should be given priority to, which include saving and consumption, domestic demand and external demand, financial regulation and financial innovation, fictitious economy and real economy, economic growth and sustainable development, and economic globalization and regional integration. He also stressed that the current common task for China and LAC is to maintain the economic stability and achieve the sustainable development. The two sides should upgrade the level of cooperation in an all-round way to achieve a win-win situation with a pragmatic spirit. 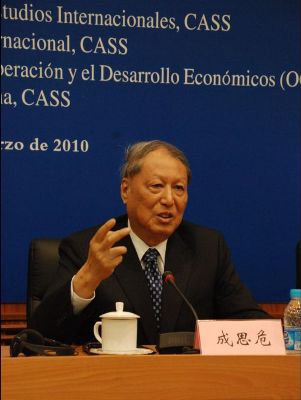 Prof. Li Yang emphasized that the financial crisis had been mainly manifested in the global economic imbalance and the North-South economic imbalance, which resulted in many problems such as inflation, fiscal deficits and destroyed the normal economic order. The global economy in future must rely on scientific and technological innovation with which the sustainable development can be achieved. Mr. Jose Antonio Garcia Belaunde took the experience of Peru in response to the current financial crisis as example in his speech and described how the emerging economies should adopt the appropriate policies to reduce the impact of crisis on the domestic economy. He spoke highly of China’s great contributions to the economic stability for the developing countries and even for the whole world under the international financial crisis, and expressed the expectation to further strengthen the bilateral trade and economic cooperation with China. LAC countries’ ambassadors and diplomats to China participated in the forum. As their representatives, Mr. Fernando Rodriguez Urena, Bolivian Ambassador to China, and Ms. Elma Campbell, Bahamian Ambassador to China, were invited to make keynote speeches on the meeting. They described in detail the policy responses to the global financial crisis and the effects based on their respective economic and social situation. 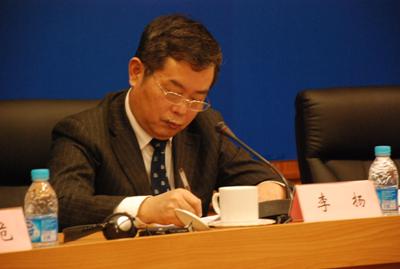 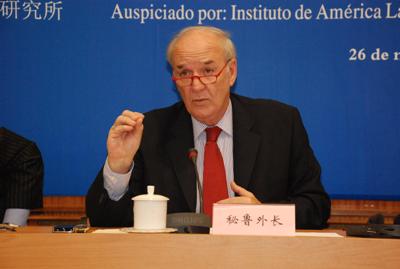 At the forum OECD and ILAS of CASS respectively released their Regular Reports for 2010. Economist Christian Daude at the Development Centre's Latin America and Caribbean Desk，OECD and Professor Wu Guoping at the Institute of Latin America,on behalf of their respective organizations, gave a presentation of their annual theme reports.OECD Development Center’s Latin American Economic Outlook 2010 analyzes the influence of global financial crisis on the region, especially in the structural areas, stresses the need to resist protectionism and recommends the export diversification and achieving a balanced public finance. At the same time, it illustrates the importance of population and capital flows concerned with the international migration in the economic recovery in LAC, especially focusing on the impacts of immigration and remittance on the labor market, financial deepening and social security. ILAS' Global Financial Crisis: Challenges & Options analyzes the LAC countries' adjustments on the fiscal, monetary, industrial, foreign trade and social policies and their effects in response to the financial crisis. It also suggests that four aspects should be considered in obtaining another new round of economic growth in LAC. The first one is the uncertainty of economic growth in LAC subject to the impact of the world economy. The second one is the continuity of counter-cyclical policies under the inflation targeting system. The third one is the industry structure adjustment brought about by technology innovation. The fourth one is the formation of a new engine for giving impetus to economic growth in the region. 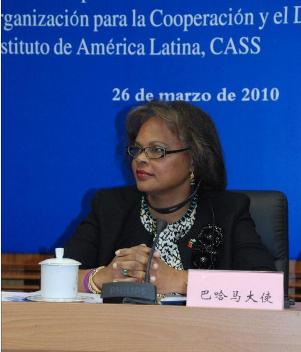 In addition, ILAS also released its annual development report — Annual Report on Latin America and the Caribbean (2009-2010) which focused on Information and Communication Technology (ICT) industry in LAC countries. The current crisis provides an opportunity for the countries all over the world to speed up the cultivation of strategic emerging industries during the post-crisis period. The technology innovation and ICT industry have been considered as one of the important policy options for LAC countries with the purpose of driving economic growth and promoting the international cooperation during the post-crisis era. 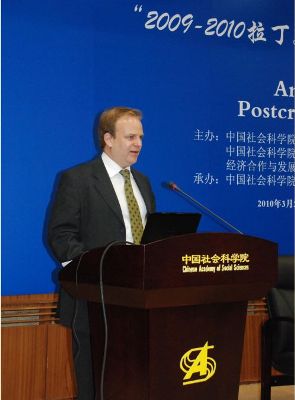 “CASS International Forum” is a platform designed to promote international academic exchanges and cooperation. The seminar on situation of LAC countries affiliated to the forum is an important annual academic meeting for Chinese circle of Latin American Studies. With the support from people from all circles and LAC countries’ ambassadors and diplomats to China, the forum has been held successively for 6 sessions with the result of its expanding scale and increasing influences. Since 2009, OECD, as one of the sponsors, has participated in the forum, which has further enhanced the reputation of the forum at home and abroad. 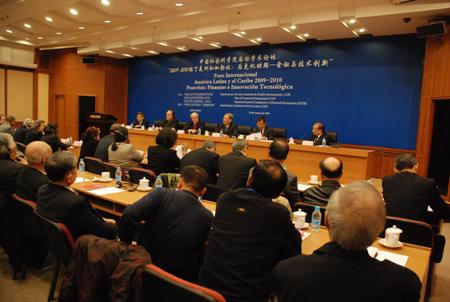 A moment of the Forum