16/11/2022 - Lithuania has become the 31st member of the OECD Development Assistance Committee (DAC), the leading international forum for bilateral providers of development co-operation. 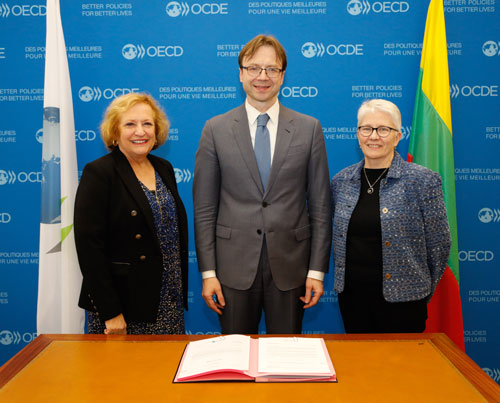 Lithuania’s accession to the DAC comes after a significant period of expansion and investment in its development co-operation activities, programmes and system. Lithuania’s official development assistance (ODA) is expected to exceed USD 100 million in 2022, in part as a result of its strong humanitarian and development support for Ukraine and in support of Ukrainian refugees in the wake of Russia’s war of aggression.

This co-operation is based on sharing Lithuania’s democratic transition experience and expertise, including in areas where it has a recognised comparative advantage, such as public administration reforms and digitalisation, support for democracy and human rights. The majority of Lithuania’s multilateral assistance goes to meeting its commitments to the European Union, World Bank Group and United Nations’ agencies. However, Lithuania is now increasing its voluntary contributions to multilateral organisations and other partners, such as the International Red Cross and Red Crescent Movement, Office of the United Nations High Commissioner for Refugees (UNHCR) and UNICEF.

Lithuania has been a member of the OECD since 2018. Its accession to the DAC brings another OECD member into the committee, contributing to the DAC's global relevance and influence and is the first since Hungary’s accession in 2016.

Further information on the OECD Development Assistance Committee is available at: http://www.oecd.org/dac/.