OECD Home AfghanistanAre the SDGs a major reboot or a sequel to the MDGs?

Are the SDGs a major reboot or a sequel to the MDGs? 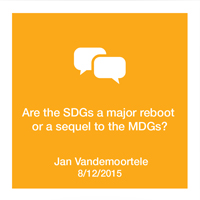 ‌‌By: Jan Vandemoortele, PhD, Co-architect of the MDGs and a critical friend of the SDGs

The main reason for putting together the Millennium Development Goals (MDGs) was to prevent the Millennium Declaration from falling into oblivion. A declaration issued by a world summit has a shelf-life of about six months. Beyond that period, its life is reduced to a small world, usually the summit’s sponsoring agency. A few months after the Millennium Summit, once the declaration started to fade away, a group of experts from across the United Nations convened to go through the Millennium Declaration. Experts from the Organisation of Economic Co-operation and Development also took part. Eighteen targets were selected and placed verbatim in a stand-alone list. They were grouped under eight goals, and 48 indicators were added for global monitoring. That list of goals, targets and indicators was submitted to the UN General Assembly in late 2001 under the heading Millennium Development Goals. And the rest is history.

The selection took extensive discussions and negotiations, but it was never the intention to represent a global agenda for development. We simply saw the MDGs as a way to maintain the Millennium Declaration’s relevance. Two criteria, though not strictly applied, played a role in the selection: clarity and measurability.

The purpose of the Sustainable Development Goals (SDGs), however, is totally different. From the beginning, stakeholders aimed for a global agenda for development. In this sense, the SDGs are not the sequel to the MDGs; they represent a major reboot. Since the SDGs are more comprehensive than the MDGs, and resulted from an extensive and participatory process, it is normal that considerably more targets (169 versus 18) and more words (about 5,000 versus about 300) are needed to spell out the SDGs than the MDGs.

Yet, a closer examination shows that, despite their comprehensiveness and wordy nature, the SDGs lack sufficient specifics to qualify as a major reboot. To be valid, a target must contain three elements: (i) a numerical outcome, (ii) a specific deadline and (iii) a well defined domain.

Item 16.5 — Substantially reduce corruption and bribery in all their forms — lacks all three elements.

The SDGs actually contain many such items as 16.5. The list is a mixture of ideals and norms, values and principles, generalities and oddities, and some repetitions; a few valid targets are sprinkled in. Indeed, the SDGs may contain 169 bullets, but actually fewer than 30 are concrete targets. Not only does their complexity turn the SDGs into a difficult storyline, but also their fuzziness will create leeway and latitude for non-objective narratives.

The concrete targets are not dissimilar from the MDGs, since they mostly cover issues such as poverty and hunger, child and maternal mortality, safe water, education and gender equality. In short, the SDGs are not quite a reboot or a paradigm shift. Neither do they represent a universal agenda that addresses inequality and sustainability. Plus ça change, plus c'est la même chose!

Such a critical assessment often provokes an angry response. But a healthy dose of objectivity is warranted. Otherwise, we risk falling victim to the tyranny of an acronym, suspending critical thinking because it could endanger the agreement about the SDGs.

Our criticism does not imply that the SDGs have no worth. But their practical implementation requires that we move beyond appearances. Implementation needs to start with each country selecting and adapting those aspects of the SDGs that are most relevant to their national context. This is often dismissed as opening the floodgates to cherry-picking, which is only valid if the selection and adaptation were done through a non-participatory process. Besides government, such selection and adaptation need to include civil society, academics, think tanks, trade unions and employers federations, and other important groupings.

At the global level, implementation of the SDGs requires addressing three aspects.

First, the way of aggregating the global narrative needs to change radically. This was mostly driven by global statistics and world maps for the MDGs, with off-track countries coloured in red. This time around, the global assessment needs to pay more attention to how global targets make a difference at national and sub-national levels.

Third and last, one of the few truly universal targets in the SDGs cannot be left orphaned. It concerns bullet 1.2 – By 2030, reduce at least by half the proportion of men, women and children of all ages living in poverty in all its dimensions according to national definitions. The global narrative is already focusing on extreme poverty and hunger, which are not universal targets. Who will be championing target 1.2? Who will compile the register of national definitions to help clarify the domain?

By addressing these aspects, the considerable time and efforts invested in the SDG negotiations by countless stakeholders will not have been an exercise in futility.