Belgium must continue reforms to sustain recovery and future growth

14/06/2022 - Belgium should intensify structural reform efforts to strengthen public finances and raise its economic potential as the war in Ukraine exacerbates fiscal and economic challenges and poses risks to the recovery.

The latest OECD Economic Survey of Belgium says labour shortages since the onset of the recovery from the pandemic as well as rising inflationary pressures and supply bottlenecks felt in many countries since Russia began its war in Ukraine are hampering Belgium’s post-COVID recovery. Increasing labour market participation and improving public spending efficiency would drive stronger growth, lower unemployment and help restore fiscal sustainability.

A revenue-neutral tax reform lowering the tax burden on salaries and wages, in particular at the lower income end, could help improve work incentives and broaden the tax base. Raising public investment and improving competition and digitalisation would foster productivity growth.

“Prior to the pandemic, Belgium enjoyed robust growth and low unemployment. The recovery from the pandemic was slightly better than for the EU as a whole, but as for many countries around the world is now being dampened by the effects of Russia’s war against Ukraine,” OECD Secretary-General Mathias Cormann said, presenting the Survey in Brussels alongside Belgian Prime Minister Alexander De Croo. “It is now even more pressing to carry out reforms to boost labour market participation, productivity growth and business dynamism, and to ensure strong and sustainable public finances.”

Belgium’s economy rebounded swiftly from the COVID-19 pandemic with GDP growth of 6.2% in 2021. However, the crisis had a disproportionate effect on young, low-skilled and immigrant workers, making for an uneven recovery. Adding to this, the war in Ukraine has increased risks to trade and supply chains and lowered business and consumer confidence. Job vacancy rates were high at the end of 2021 and inflation reached 9.9% in May. The Survey sees the pace of recovery slowing to 2.4% growth in 2022 and 1% in 2023, notably as the consequences of the embargo of the European Union on Russian oil materialise. Core inflation is projected at close to 5% through 2023 before easing. 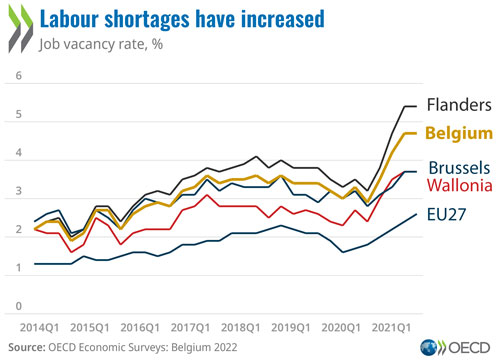 The Survey recommends boosting equality of opportunities for disadvantaged groups in terms of education, labour and housing to promote social mobility, as well as improving adult skills and facilitating job reallocation through more flexible labour and product markets. While the government’s existing recovery plans provide a good starting point to accelerate investment and growth, further reforms are needed to foster productivity growth and help the economy adapt to the digital and green transitions, for example via changes to streamline highly regulated building and environmental permits.

The Survey also recommends a medium-term fiscal consolidation strategy based on spending reviews to help lower the debt-to-GDP ratio, which reached 108.4% of GDP in 2021, up more than ten percentage points from 2019. With public spending among the highest of OECD countries at almost 55% of GDP in 2021, Belgium could also introduce multiannual budgeting, including an expenditure rule. Fiscal support provided to households and firms affected by high energy prices should be targeted and temporary.

A planned pension reform, which seeks to keep more older people in jobs for longer will help to ease the growing pressure on public finances from population ageing. Without policy reforms, Belgium’s public spending on pensions is set to rise from 12.2% of GDP to 15% of GDP in 2070, higher than the European Union average of 12% of GDP. Belgium’s employment rate is lower than in peer countries, especially for groups such as low-skilled workers, migrants or the disabled, and people stop working at age 60.5, on average, compared with an OECD average of 63.1.

The government is also preparing a broad tax reform whose main objective is to boost jobs and growth by lowering labour taxes, which remain high despite past reforms. A tax reform should also include in-work benefits for low-income single parents whose participation is discouraged by higher taxes and lower benefits when taking up jobs. The Survey also discusses ways that more flexibility could be introduced into Belgium’s wage setting mechanism to boost productivity growth.

See a Survey Overview with key findings and charts (this link can be used in media articles).