Remarks by Angel Gurría, OECD Secretary-General, delivered at the International Forum of Americas

Ladies and gentlemen,
It is an honour and a pleasure to be here and address this distinguished audience.

I would like to share with you today the OECD vision of the global economic outlook and our assessment of the challenges lying ahead.

Our recent Economic Outlook, published during our Ministerial Meeting two weeks ago, identified fiscal consolidation as the number-one longer-term challenge facing many OECD countries… Indeed, many of our Member countries are facing very unfavourable government debt dynamics. Rising indebtedness raises risk premia, which adds in turn to the debt burden while holding back growth, and this has further adverse consequences on debt sustainability. How to get out of this dangerous spiral? How can we address this challenge while at the same time keeping an eye to the need to support a still fragile recovery?

The world is emerging from the deepest recession since the 1930s. Yes, the recovery is under way. But it is fragile and is proceeding at a different pace in the different regions of the OECD.  Moreover, the crisis has left most OECD countries with an unenviable legacy of high unemployment, lower potential growth, as well as large government deficits and rapidly accumulating government indebtedness.

We estimate that potential output has fallen by some 3% or 4% in the OECD area as a whole as a result of the crisis. This reflects the severity of the crisis and is in part due to the increase in unemployment. The OECD-wide unemployment rate rose to a high of 8.8% in December 2009, from a 25-year low of 5.6% in late 2007. In the Economic Outlook we project the unemployment rate in the OECD to decline, but only slowly, remaining above 8% through 2011.

The crisis has wreaked havoc in the public finances. Almost everywhere in the OECD area discretionary fiscal measures, coupled with cyclical revenue losses and expenditure increases (in part related to high unemployment), have resulted in sharp increases in budget deficits and a corresponding build-up of government indebtedness. As a result, budget deficit in the OECD area as a whole soared in 2009 and will remain close to 8% of GDP in 2010. More worryingly, government debt will equal annual GDP by 2011.
This combination poses tremendous challenges going forward.

This was illustrated by the severe distress in sovereign debt markets recently seen in Europe. Here we saw starkly the consequences of high deficits, growing indebtedness and the perception of weak growth prospects. Indeed, this episode has been a wake-up call to many countries, and not just those in the euro area. They are now stepping up plans for fiscal consolidation, as well as accelerating much-needed fundamental structural reforms.

An increasing number of countries have already begun to remove stimulus, and articulate plans for fiscal consolidation.  But the pace and magnitude of fiscal consolidation needs to depend on individual country conditions and the state of the public finances and they need to be internationally consistent 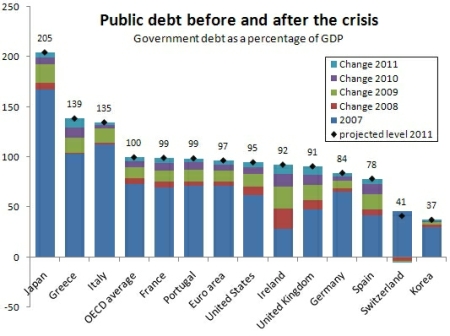 In this regard, our advice is that fiscal consolidation should be as growth-friendly as possible. This means that, on the spending side, growth-enhancing programmes, such as on human capital accumulation, R&D and infrastructure investment should be preserved to the extent possible. So should programmes aimed at ameliorating any long-term negative impacts of the downturn – particularly in the labour market. At the same time, the scope for making government spending more cost-effective should not be underestimated, for example in the areas of health care and education. Where revenue hikes are needed, emphasis should be placed on the least distortive taxes, such as those on property rather than on labour and income.
Beyond the short-term, structural reform will be needed to unlock opportunities for investment, to boost labour productivity and to ensure that labour resources are fully utilised. This is essential for restoring potential growth.

Coordination of fiscal and monetary policies is also an important consideration. This is particularly the case as interest rates in most regions are effectively at zero and a long way below any estimates of a neutral rate. Monetary normalisation will take some time, especially unwinding the unconventional measures taken in many countries.

Last but not least, the international dimension of consolidation needs to be taken into account. Indeed, if adjustment takes place at more or less the same time in many countries, there is a risk of a downward spiral bringing the world economy back to recession.

Let me now discuss in more details the Canadian situation. Like in most other OECD countries, Canada’s fiscal position slipped dramatically through the recession, from a modest surplus in 2008 to a deficit of over 5% of GDP last year. Now that the recession has ended and with a moderate recovery projected, we foresee a healthy improvement in the fiscal position over the next two years. Nevertheless, achieving a positive fiscal balance is expected to take several more years.

It is our assessment that fiscal consolidation could be accelerated. The fiscal tightening should be done at both the federal level and in nearly all provinces and territories. Indeed, the two largest  provinces, Ontario and Quebec, face especially challenging fiscal situations.

Moreover, as recently pointed out by David Dodge, Canada’s relatively sound position masks
important structural issues that loom on the horizon and need immediate attention. Not the
least of these are demographic pressures which are set to intensify.  These pressures will hit hardest at the provincial level, which bears responsibility for health care.

Consolidation strategies should thus focus on curbing public expenditures, particularly in health care. Transparency and credibility are important ingredients of a sustained fiscal effort, and Canada has a strong and credible record to build upon.

But fiscal discipline can still be made stronger. Fiscal rules – whether on deficits, debt or spending – have proved effective as consolidation enforcement mechanisms in the experience of many OECD countries. They should be considered in Canada. An additional advantage of fiscal rules is that they might also help a number of jurisdictions implement more prudent approaches to saving and reduce the pro cyclicality of their fiscal policies.

These and other issues will be discussed in more depth in our upcoming Economic Survey of Canada, which is expected to be published later in the year.

To sum up, we may be emerging from the crisis, but the recovery is still fragile and might well be bumpy. We are now entering a long phase of harsh fiscal consolidation. We should walk this painful road firmly but smartly, not forgetting structural reforms focusing on preparing the economy to top new sources of growth, such as innovation and green growth. We are working on these at the OECD and just delivered a new Innovation Strategy, while our new Green Growth Strategy will be finalised next year. These are the avenues out of the crisis.

Thank you for your attention. I look forward to a lively debate.