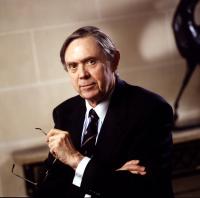 Upon taking office as Secretary-General of the OECD on 1st June 1996, Don Johnston moved from a career as a lawyer and politician who spent 10 years in the Canadian Parliament and served as a Cabinet Minister in a number of senior portfolios.

In 1988, Mr. Johnston ended a decade of political life to become legal counsel to the prominent Canadian law firm, Heenan Blaikie, of which he was a founder in 1972. The firm now has more than 300 lawyers in offices in Canada and the United States.

His decision to leave politics was partly due to disagreement with his Party on his support for the Free Trade Agreement between Canada and the United States, which he voted for in the House of Commons.

Following that policy difference, he chose to sit as an independent and did not seek re-election.

Mr. Johnston was a Member of Parliament from 1978 to 1988. He served in the Cabinet, first as President of the Treasury Board (which manages the federal public service and controls the national budget), and then as Minister of State for Economic and Regional Development, Minister of Science and Technology, Minister of Justice and Attorney General of Canada. With the defeat of the Liberal government in 1984, Mr. Johnston became Opposition Critic for Finance and, later, External Affairs.

Mr. Johnston studied Arts and Law at McGill University, graduating from law in 1958 as the Gold Medallist. In 1958-59 he studied at the University of Grenoble on a scholarship.

He taught fiscal law at McGill University from 1963 to 1976. He has written many articles on taxation, law and public affairs and is the author of several books including a best-selling political memoir.

Donald J. Johnston, whose term expired in May 2006, has been awarded the French Légion d’honneur for his service as Secretary-General of the OECD from 1996 to 2006.