Model Tax Convention on Income and on Capital: Condensed Version 2017 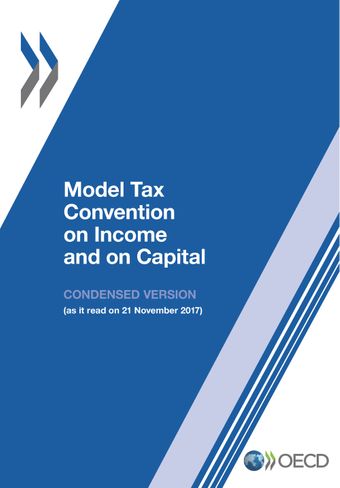 The OECD Model Tax Convention, a model for countries concluding bilateral tax conventions, plays a crucial role in removing tax related barriers to cross border trade and investment. It is the basis for negotiation and application of bilateral tax treaties between countries, designed to assist business while helping to prevent tax evasion and avoidance. The OECD Model also provides a means for settling on a uniform basis the most common problems that arise in the field of international double taxation.

The 2017 edition of the OECD Model mainly reflects a consolidation of the treaty-related measures resulting from the work on the OECD/G20 BEPS Project under Action 2 (Neutralising the Effects of Hybrid Mismatch Arrangements), Action 6 (Preventing the Granting of Treaty Benefits in Inappropriate Circumstances), Action 7 (Preventing the Artificial Avoidance of Permanent Establishment Status) and Action 14 (Making Dispute Resolution More Effective).

Model Tax Convention on Income and on Capital 2017 (Full Version)

The full version contains the full text of the Model Tax Convention as it read on 21 November 2017, including the Articles, Commentaries, non-member economies’ positions, the Recommendation of the OECD Council, the historical notes and the background reports.