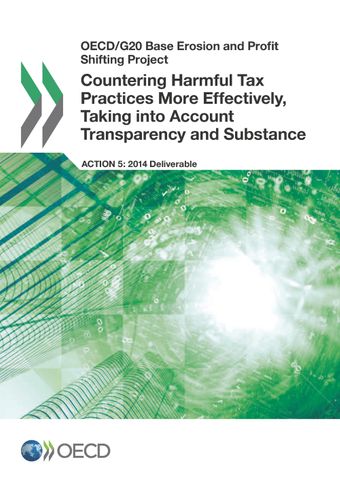 Preferential regimes continue to be a key pressure area in international taxation. The OECD’s 2013 BEPS report recognises that these need to be dealt with more effectively and the work of the Forum on Harmful Tax Practices (FHTP) needs to be refocused with an emphasis on substance and transparency. This is an interim report that sets out the progress made to date.

06/02/2015: First steps towards implementation of OECD/G20 efforts against tax avoidance by multinationals

Determining which intellectual property regimes (patent boxes) and other preferential regimes can be considered harmful tax practices is another key objective of the BEPS Project. In Brisbane, G20 Leaders endorsed a solution proposed by Germany and the UK on how to assess whether there is substantial activity in an intellectual property regime. The proposal – based around a “nexus approach,” which allows a taxpayer to receive benefits on Intellectual Property income in line with the expenditures linked to generating the income - has since been endorsed by all OECD and G20 countries. Transitional provisions for existing regimes, including a limit on accepting new entrants after June 2016, have been agreed, and work on implementation is ongoing.