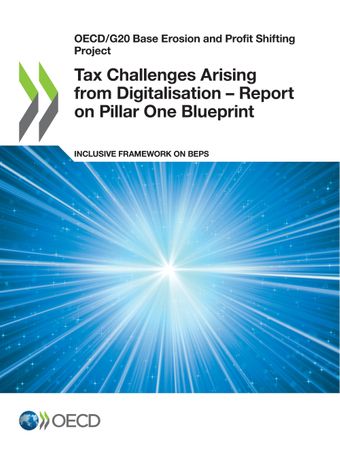 Tax Challenges Arising from Digitalisation – Report on Pillar One Blueprint

The OECD/G20 Base Erosion and Profit Shifting (BEPS) Project aims to create a single set of consensus-based international tax rules to address BEPS, and hence to protect tax bases while offering increased certainty and predictability to taxpayers. Addressing the tax challenges raised by digitalisation has been a top priority of the OECD/G20 Inclusive Framework in BEPS since 2015 with the release of the BEPS Action 1 Report. At the request of the G20, the Inclusive Framework has continued to work on the issue, delivering an interim report in March 2018. In 2019, members of the Inclusive Framework agreed to examine proposals in two pillars, which could form the basis for a consensus solution to the tax challenges arising from digitalisation. That same year, a programme of work to be conducted on Pillar One and Pillar Two was adopted and later endorsed by the G20. This report focuses on new nexus and profit allocation rules to ensure that, in an increasingly digital age, the allocation of taxing rights with respect to business profits is no longer exclusively circumscribed by reference to physical presence. It reflects the Inclusive Framework’s views on key policy features, principles and parameters, and identifies remaining political and technical issues where differences of views remain to be bridged, and next steps.

As part of the ongoing work to develop a solution to the tax challenges of the digitalisation of the economy, the OECD/G20 Inclusive Framework on BEPS is seeking public comments the Reports on the Pillar One and Pillar Two Blueprints. The public consultation meetings on the Blueprints will be held on 14-15 January 2021 (virtually).