West Africa’s food economy is witnessing major transformations that create new opportunities and pose new challenges for food and nutrition security. Population dynamics and in particular urbanisation have been major drivers of these transformations. Between 1950 and 2015 the region’s population grew from 73 million to 370 million. There are now 150 million people living in West Africa’s cities, 25 times more than in 1950. As a result, the size of the food economy grew spectacularly, accounting for USD 260 billion in 2015, or 39% of regional GDP.

A growing number of households are turning to markets for their food supply. In urban areas, almost all food is bought on the market. At the same time, increasingly diversified rural economies and the spread of urban products and lifestyles mean that the share of the rural food supply from markets is also growing. Overall, markets provide at least two-thirds of household food consumption at the regional level.

Urbanisation and urban lifestyles are also accompanied by shifts in dietary patterns, which are spreading beyond the frontiers of towns and cities. More fruits and vegetables and more processed foods are being consumed, while consumption of cereals and pulses is declining. Demand for convenience is another overarching trend across income groups and are reflected in the strong demand for processed and prepared foods and in the expansion of street food. Processed foods represent 41% of food budgets in urban areas and 36% in rural areas.

The combined effects of rapid urbanisation, population growth and resulting transformations in the demand for food have had major impacts on the size of the West African food economy and its structure.  A major evolution of the food economy is the rapid development of non-agricultural postharvest activities, such as processing, packaging, distribution and retail. Already today, these account for 40% of the sector's value added and will continue to expand quickly.

These transformations open up new opportunities for value addition and employment creation, and increasingly in the off-farm segments of the value chain. Given the size of the food economy its functioning/competitiveness and development has major impacts on the current employment structure and future job opportunities and needs. These ongoing transformations of the food economy have important impacts on the scope and effectiveness of food and nutritional security policies and early warning mechanisms, and food policy more broadly. Policies need to adjust to these changes in order to fully leverage the new opportunities in terms of value generation, employment and economic diversification, improved affordability and stability of food supply, and nutritional outcomes.

Job opportunities in the food economy 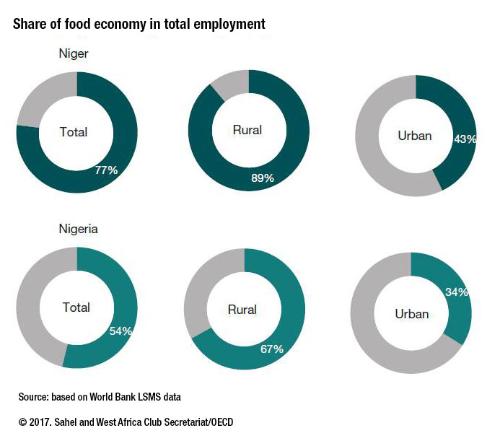 With the importance of the regional food economy in employment, changes in its structure will have major implications for the types of jobs and skills needed. The objective of this programme is to develop a thorough understanding of the current situation and mid-term perspectives for West African food markets with regard to employment. The analyses will provide situation analysis of current food economy employment patterns in West Africa. The situation analysis will be followed by near-term projections on the impact of food demand transformations on the potential of the agri-food system to provide jobs, in particular in off-farm activities in rural and urban areas and spatial and territorial implications to generate guidance on constraints and strategies to improve employment opportunities in West Africa. 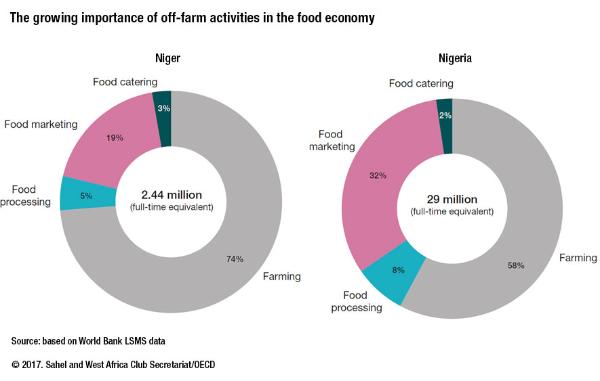 The development of the food economy and the increasing role of markets in structuring value chain activities is also impacting the spatial dimension of food markets. Where food is produced, by whom and how it reaches the consumer is a central element of rural-urban linkages and regional food flows. There is however, a lack of data and analyses on the spatial aspects of food economy development, such as the location of food market infrastructure, including collection hubs, processing and packaging facilities, wholesale and retail market structure, local labour markets and skills demand. 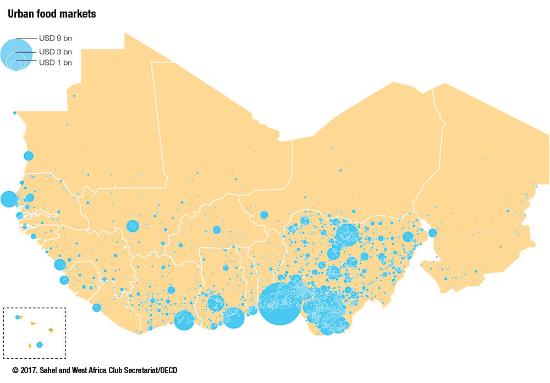 Using Africapolis data and geo-spatial information on food economy employment and spatial analyses we will highlight territorial policy implications of food economy development. A particular focus will be placed on rural areas and the role of proximity to urban areas, the role of small towns and secondary cities, that are the entry points to the food system for the vast majority of the region’s family farms and on the implications of food demand concentration in large urban centres for intra-regional trade.

The current early warning systems are based on a geographical disaggregation of food and nutrition insecurity zones but do not make an explicit distinction between urban and rural areas. Even though the numbers of urban and rural residents in West Africa are now roughly equivalent, analyses are lacking and the available tools are insufficient for providing an accurate picture of the food and nutrition situation in urban settings and designing effective response mechanisms.

A review is needed of the current and future (ten years out) food and nutrition insecurity issues in urban areas, including an analysis of specific spatial factors. This work will build on the work done by the Secretariat in the past and in close collaboration with the work on the regional governance of food and nutrition security. This will help better inform policy makers working to target vulnerable populations, identify prime levers for action and allocate public resources; it will also contribute to improving existing monitoring systems.

Analysing urban food and nutrition security issues and monitoring tools. The Secretariat will facilitate a combined consultation and analysis process. This will consist in i) consulting with members of the Food Crisis Prevention Network (RPCA) and completing an inventory of the approaches and tools for monitoring food and nutrition security in urban settings; ii) analysing urban food and nutrition security issues; iii) identifying, in consultation with PREGEC actors, the relevant and applicable indicators to be included in the mechanism. This activity will build on work done in the past and on the Secretariat’s available data on urbanisation dynamics in the region, in particular Africapolis.

Supporting the development of tools for monitoring food and nutrition security in urban areas and strengthening the Harmonised Framework. The support provided for including urban food and nutrition insecurity monitoring indicators in the PREGEC mechanism will be technical and methodological in nature.  In collaboration with CILSS, the Secretariat will facilitate discussions amongst RPCA members on monitoring urban food insecurity; discussions will include working sessions and technical workshops.