Some elements of the Ivorian crisis

According to provisional results announced by Youssouf Bakayoko, the president of the Independent Electoral Commission (CEI) on Thursday, 2 December 2010 at the Golf Hotel, Alassane Ouattara won 2,483,164 votes or 54.10% of the votes cast. Laurent Gbagbo, Presidential Majority (LMP) candidate and the outgoing president, is credited with 2,107,055 votes or 45.90% of the votes cast. The CEI announced that it submitted the registered and validated results along with all of the minutes of vote counting and supporting documentation to the Constitutional Council, in accordance with applicable law. Final results declared by the President of the Constitutional Council, Paul Yao N'Dré, the following day, 3 December 2010, put Gbagbo in the lead with 51.45% of votes.

The difference is explained by the cancellation of almost 600,000 votes from seven departments in the north (> see map and table) by the Constitutional Council "because of serious irregularities in the integrity of the poll: [...] lack of representatives and delegates in the polling locations; stuffing of ballot boxes, transportation of records by unauthorized persons; suppression of voters, lack of voting booths; added votes."

Results published by the Constitutional Council 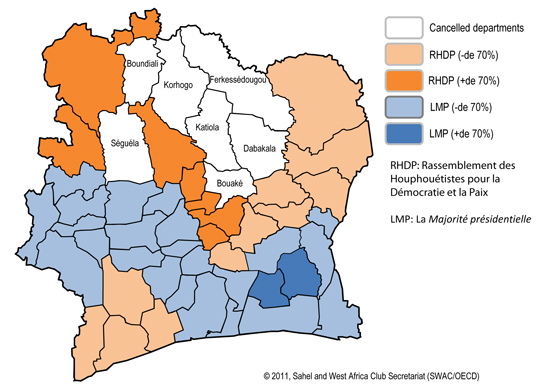 Results of the second round in the seven departments invalidated for voter fraud by the Constitutional Council on December 3, 2010: 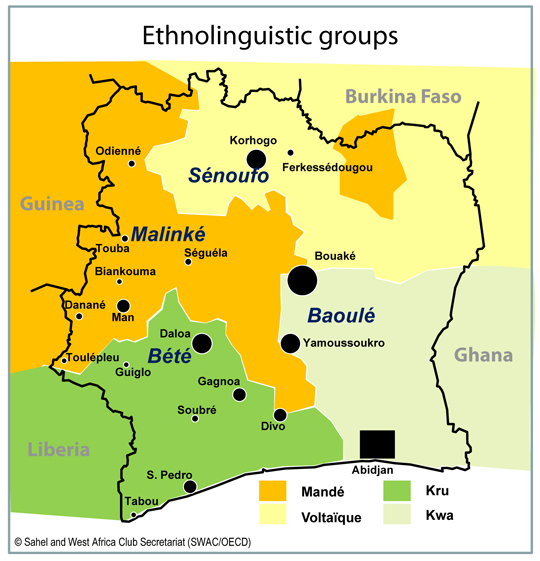 Transcending national boundaries, these spaces are a useful reference point but are under no circumstances sufficient to analyse the Ivorian situation. Ivorian urban areas are diverse, hosting a mix of all ethnic groups. 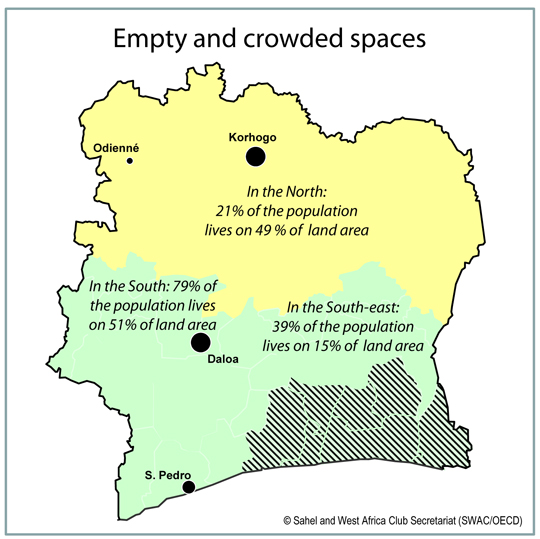 Côte d'Ivoire is at the epicenter of the accelerated restructuring of the West African population. Over the past six decades, the country's total population has been multiplied by 9, - the rural by 5 and the urban by 44. These figures do not compare with those of its neighbours (> table).

These differences are explained by regional migration but also by very high internal mobility. The South and its coast, rather than Côte d’Ivoire as such, is the attraction. In the 70s, the birth and development of the city of San Pedro was due to migrants from Mali and Upper Volta as well as from indigenous Kru and Ivorians from the north and east of the country. The Daloa department's population is one third indigenous (mainly Bete), one third from another Ivorian region (mainly Baoulé Central West and Malinke / Northern Senufo) and one third from Sahelian countries (1998 figures). In contrast, the northern cities are overwhelmingly populated by indigenous peoples. Even those located near a border, such as Odienné and Korhogo, have less than 5% immigrants and foreigners. 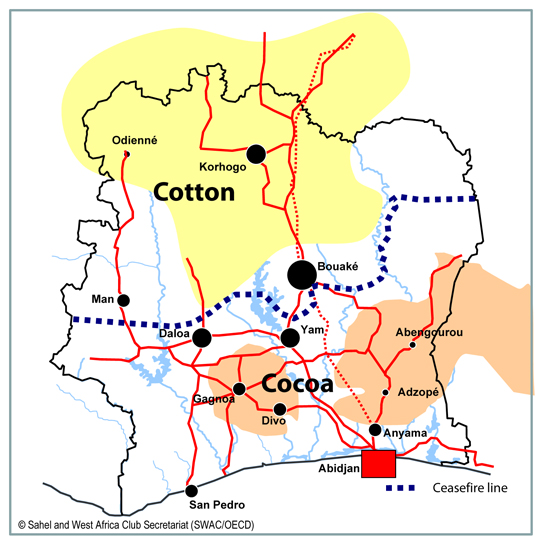 The creation in 2002 of a ceasefire line between the “Forces Nouvelles” and the national armed forces cut the country in two. This line also separates the ‘savanna’ Côte d’Ivoire from the forest, and cocoa/coffee from the cotton region. The urban and road networks are much more developed in the south than in the north.

The "wealth" of the south is also symbolized by the port of Abidjan. But is it truly the port of the south? It was always meant to radiate far beyond southern Côte d’Ivoire. However, this influence is not immutable. The performance drop of the port and problems of maladministration on the country roads have undermined Abidjan’s monopoly. Moreover, this corridor is not the only one available for the Sahelian countries to access markets for their products and to have access to a supply of goods.

Bamako has access to three ports that are at an almost equal distance: Dakar (1200 km via Kayes), Conakry (950 km via Kankan) and Abidjan (1100 km via Bouaké). Bamako is only connected by rail to Dakar, but the railway is in poor condition. The trip to Conakry is delayed by the difficult crossing of the Fouta Djallon.

Similarly, Ouagadougou has several access to the sea: Abidjan, Accra (Tema) and Lomé. The connection with Abidjan is by both road and rail. The other two are by road only and are in fair condition. Any period of crisis in Côte d'Ivoire boosts the development of alternative corridors. 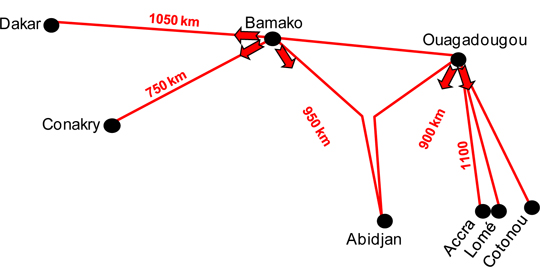