Comparable statistics of work and study in 23 countries/regions participating in the 2012 Survey of Adult Skills (PIAAC) show that 39% of students work on average across these countries, an incidence that ranges from about 15% in Italy to over 60% in the Netherlands.

The type of work students do varies widely

Apprenticeships account for more than 40% of all work and study in Italy, Austria, France, Germany and Denmark. Vocational education training programmes also account for a large portion of work and study in some countries, exceeding 20% in the Czech Republic, Denmark, Norway and Poland. But many youth who combine work and study are neither apprentices nor studying towards a VET programme. This is particularly the case in England/N. Ireland, Japan, Korea, Sweden and the United States where this group accounts for about 90% of work and study. 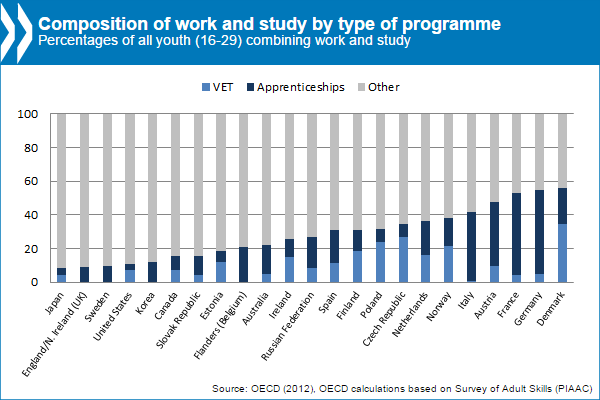 Youth studying towards a tertiary qualification are more likely to work than youth who are still in high school in most countries, with the exception of countries where apprenticeships play a large role in upper secondary education. 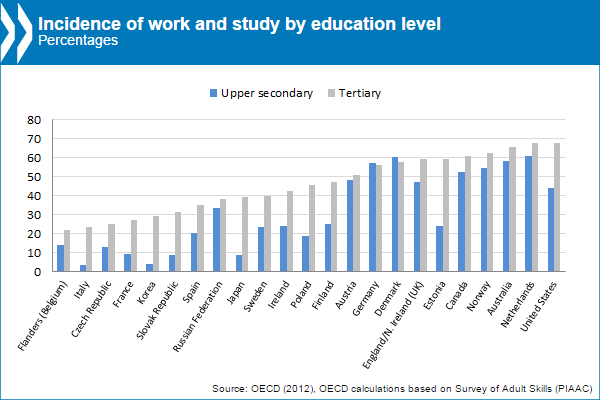 Differences across fields of study are less marked for tertiary students than for upper-secondary ones. Students in health and welfare, teacher training and education science or the humanities, languages and arts are the most likely to work.

This is an area where cultural differences play a major role, across countries and among employers. In continental European countries, there is a study first, work later logic that applies to the majority of students while in anglo-saxon countries many students work and evening, summer, or week-end jobs are common. In some countries, employers value even odd jobs as they allow students to acquire some generic skills required at work – time-keeping, team-work, self-organisation or presentation skills. In others, generally those where credentials play a key role, employers are focused on work experience that is specific to the content of the job they are recruiting for. 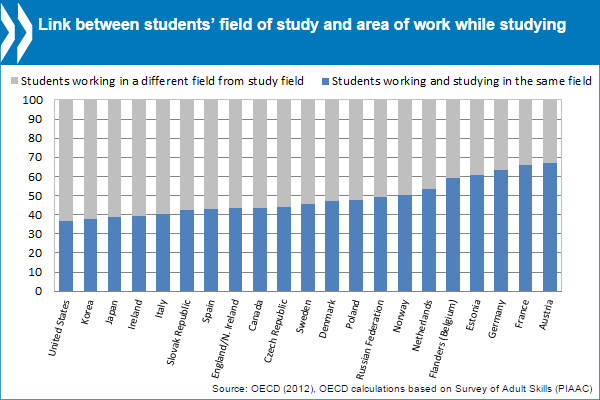