Latest News on Co-operation with Bulgaria

On 20 September 2019, the Secretary-General welcomed to the OECD H.E. Mr. Emil Karanikolov, the Minister of Economy of Bulgaria. They discussed the fruitful collaboration between Bulgaria and the OECD as well as the implementation of Bulgaria’s OECD Action Plan. The Action Plan aims to enhance Bulgaria’s engagement with a range of OECD bodies and to increase Bulgaria’s adherence to OECD standards, while identifying a number of policy areas where OECD expertise will support the domestic reform agenda. Minister Karanikolov also delivered a special address on the Action Plan to Ambassadors during Council. More event photos

On 5 July 2019, as part of Bulgaria’s efforts to deepen and structure its co-operation with the OECD and contribute to the country’s public policy and reform agenda, Bulgaria’s Prime Minister Boyko Borissov presented an Action Plan to OECD Secretary-General Angel Gurría. 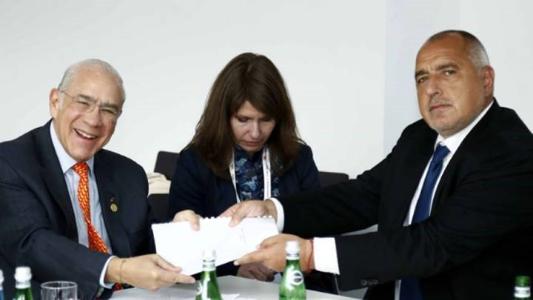 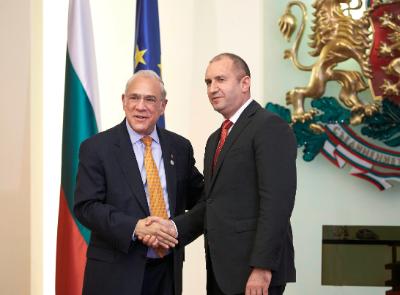 Bulgaria has co-operated with the Organisation via thematic initiatives and a country-specific programme since the early 1990s. This co-operation has been developing through the years based on demand and mutual benefit. Currently, Bulgaria is active in the OECD SEE regional programme and participates in statistical reporting and information systems, benchmarking exercises such as the Programme for International Student Assessment (PISA), publications and policy reviews.

Bulgaria has repeatedly expressed its interest in an OECD accession. More recently, Bulgaria’s interest in OECD accession was expressed in writing by its Minister of Foreign Affairs in 2015 and reiterated ever since by President Radev as well as by Prime Minister Borissov. The preparation for accession to the OECD is coordinated by a dedicated inter-ministerial committee and has been included as one of the priorities in the Government Programme for Stable Development for the period 2014-2020.

Bulgaria’s engagement with the OECD also encompasses participation in OECD bodies and legal instruments. Through this form of co-operation, Bulgaria benefits from and contributes to dialogue with senior officials from member and partner countries to advance ideas and review progress in specific policy areas.

Bulgaria was among the first non-OECD Members to accede to the OECD Convention on Combating Bribery of Foreign Public Officials in International Business Transactions in 1999. In 2016, Bulgaria accepted the OECD invitation to participate in the G20/OECD Project on Base Erosion and Profit Shifting of the Committee on Fiscal Affairs as an Associate. In the field of taxation, Bulgaria is a member of the Global Forum on Transparency and Exchange of Information for Tax Purposes. Bulgaria recently joined the Convention on Mutual Administrative Assistance in Tax Matters, the Multilateral Agreement on Exchange of Information for Tax purposes and signed the Multilateral Convention to Implement Tax Treaty Related Measures to Prevent Base Erosion and Profit Shifting.