OECD Home Social and welfare issuesHealth for Everyone? - Social Inequalities in Health and Health Systems - en 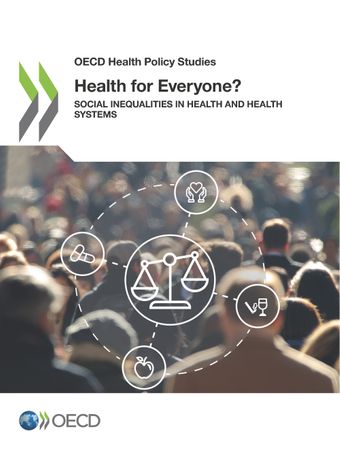 Good health is a key component of people’s well-being. It is a value in itself but – through its influence on social, education and labour market outcomes – being in good or bad health has also wider implications on people’s chances of leading a fulfilling and productive life. Yet, even in the OECD countries, health inequality persists with severe consequences on the goal of promoting inclusive growth. This report documents a comprehensive range of inequalities in health and health systems to the detriment of disadvantaged population groups in a large set of OECD and EU countries. It assesses the gaps in health outcomes and risk factors between different socio-economic groups. When it comes to health systems, the report measures inequalities in health care utilisation, unmet needs and the affordability of health care services. For each of these different domains, the report identifies groups of countries that display higher, intermediate, and low levels of inequality. The report makes a strong case for addressing health-related inequalities as a key component of a policy strategy to promote inclusive growth and reduce social inequalities. It also provides a framework for more in-depth analyses on how to address these inequalities at country level.

Inequalities in risky health behaviour frequently go hand in hand with inequalities in health status. In all 33 countries included in the study, the lower-educated consider themselves to be in worse health than those with tertiary education, with a 21 percentage points difference between the two groups.

Notes: Results correspond to age-sex standardised predicted probabilities.
Differences between education groups are significant at the 95% confidence level for all countries.
Source: OECD estimates based on national survey data.

Note by Turkey: The information in this document with reference to “Cyprus” relates to the southern part of the Island. There is no single authority representing both Turkish and Greek Cypriot people on the Island. Turkey recognises the Turkish Republic of Northern Cyprus (TRNC). Until a lasting and equitable solution is found within the context of the United Nations, Turkey shall preserve its position concerning the “Cyprus issue”.
Note by all the European Union Member States of the OECD and the European Union: The Republic of Cyprus is recognised by all members of the United Nations with the exception of Turkey. The information in this document relates to the area under the effective control of the Government of the Republic of Cyprus.