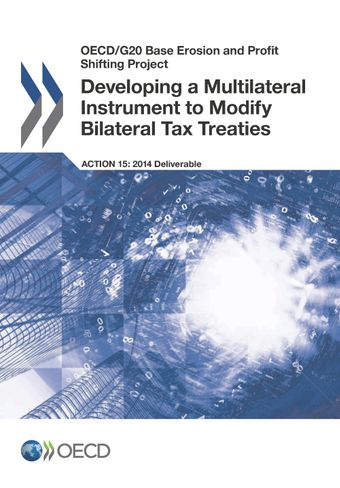 This report identifies the issues arising from the development of a multilateral instrument that modifies bilateral tax treaties. Without a mechanism for swift implementation, changes to model tax conventions only widen the gap between the content of these models and the content of actual tax treaties. Developing such a mechanism is necessary not only to tackle base erosion and profit shifting, but also to ensure the sustainability of the consensual framework to eliminate double taxation. This is an innovative approach with no exact precedent in the tax world, but precedents for modifying bilateral treaties with a multilateral instrument exist in various other areas of public international law. Drawing on the knowledge of experts in public international law and taxation, the Report concludes that a multilateral instrument is desirable and feasible, and that negotiations for such an instrument should be convened quickly.

28/05/2015: Work underway for the development of the BEPS Multilateral Instrument

Work on the development of the Multilateral‎ Instrument to implement the tax treaty-related Base Erosion and Profit Shifting (BEPS) Action Plan began on 27 May 2015 in Paris. As per the OECD/G20 mandate, the ad hoc Group that will complete the work under Action 15 has been established, with over 80 countries participating. At the meeting, members of the Group appointed Mr. Mike Williams of the United Kingdom as Chair, and Mr. Liao Tizhong of the People’s Republic of China, Mr. Mohammed Amine Baina of Morocco and Mrs. Kim S. Jacinto-Henares of the Philippines as Vice-Chairs. Participants also agreed on a number of procedural issues so that the substantive work can begin at an Inaugural Meeting which will take place on 5-6 November 2015 (back to back with the 20th Annual Tax Treaty Meeting for government officials which will take place on 3-4 November 2015). A number of international organisations will also be invited to participate in the work as Observers.

06/02/2015: First steps towards implementation of OECD/G20 efforts against tax avoidance by multinationals

The implementation of the BEPS Action Plan will require modifications to the existing network of more than 3,000 bilateral tax treaties worldwide. The planned multilateral instrument will offer countries a single tool for updating their networks of tax treaties in a rapid and consistent manner.

The agreed mandate authorises the formation of an ad-hoc negotiating group, open to participation from all states. The group will be hosted by the OECD and will hold its first meeting by July 2015, with an aim to conclude drafting by 31 December 2016.