The OECD and Colombia: A mutually beneficial relationship

Colombia officially became the 37th member of the Organisation on 28 April 2020, successfully bringing to a conclusion an accession process that began in 2013. Colombia is now the third Member country from the Latin America and Caribbean region to join following  Chile and Mexico. A fourth, Costa Rica, is entering the final stages of its accession process to the Organisation.

OECD Member countries formally invited Colombia to join the Organisation in May 2018, following a five-year accession process during which it underwent in-depth reviews by 23 OECD Committees and introduced major reforms to align its legislation, policies and practices to OECD standards, including on labour issues, reform of its justice system, corporate governance of state-owned enterprises, anti-bribery, trade as well as establishing a national policy on industrial chemicals and waste management.

Colombia has valued the opportunity to discuss major policy issues and challenges in a multilateral context and to learn from the experiences of OECD countries facing similar challenges in many areas. In turn, this dialogue has enriched the OECD’s knowledge and policy advice, and benefited OECD Members and non-OECD countries by enabling them to acquire a better understanding of Colombia. We will continue to support Colombia as a new member in order to further deliver on our joint quest to make OECD standards and policies count on a global scale which is today more important than ever. 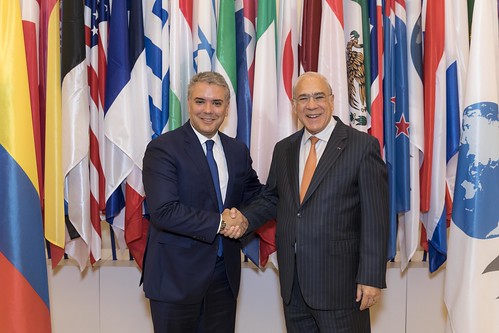 The Economic Survey analyses Colombia’s economic and social progress over the last two decades. By maintaining solid macroeconomic policies, the country has set the basis for higher productivity and inclusiveness over the years. Colombia served as host for the Third Ministerial Summit on Productivity: Harnessing the Digital Transformation to Boost Productivity in LAC on 25 October 2019.