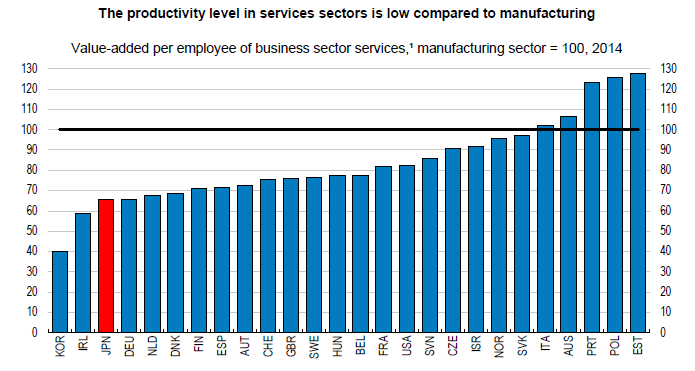 ‌The productivity level in services relative to manufacturing is particularly low in Japan, dragging down economy-wide labour productivity, which is significantly below the average of the upper-half of OECD countries. Therefore, reducing regulatory barriers to competition and innovation in network industries as well as professional services and retail distribution remains a key reform priority. Another notable challenge is rapid population ageing. In a context of growing labour force shortages, boosting the full-time labour participation of women has been high on the policy agenda. However, this requires comprehensive reforms that not only remove institutional disincentives for full-time labour participation but also promote a working environment that can help to reconcile work and family responsibilities.

1. Business sector services cover distributive trade, repair, accommodation, food and transport services; information and communication; financial and insurance; professional, scientific and support activities. Data refer to 2013 for Belgium, Denmark, France, Israel, Italy, Japan, Korea, Poland, Portugal, Slovak Republic, Spain, Switzerland, the United States; 2012 for Australia and the United Kingdom. The observation on business sector services in Japan is an estimate based on National Accounts for 2013 and the 2014 JIP Database. The data on manufacturing for Israel include mining and quarrying while the data on business sector services include real estate activity.